Let's learn what React is, what tools we need to use to get started with it, and build a very simple app in React

In this series of articles, we’ll be learning React from scratch.

In this article, we’ll cover several things related to getting started properly with React. This will make our lives easier as we get into some more advanced concepts later on it this guide.

React is a library for the web, written in the JavaScript language.

The purpose of this library is to code the UI of our websites.

Let’s get right into it.

To be more efficient working with React, I highly recommend installing React Developer Tools in your browser of choice.

Mine is Chrome, and since it is by far the most popular browser, it’s the only one we’ll cover.

We’ll install it by clicking on the Add to Chrome button. 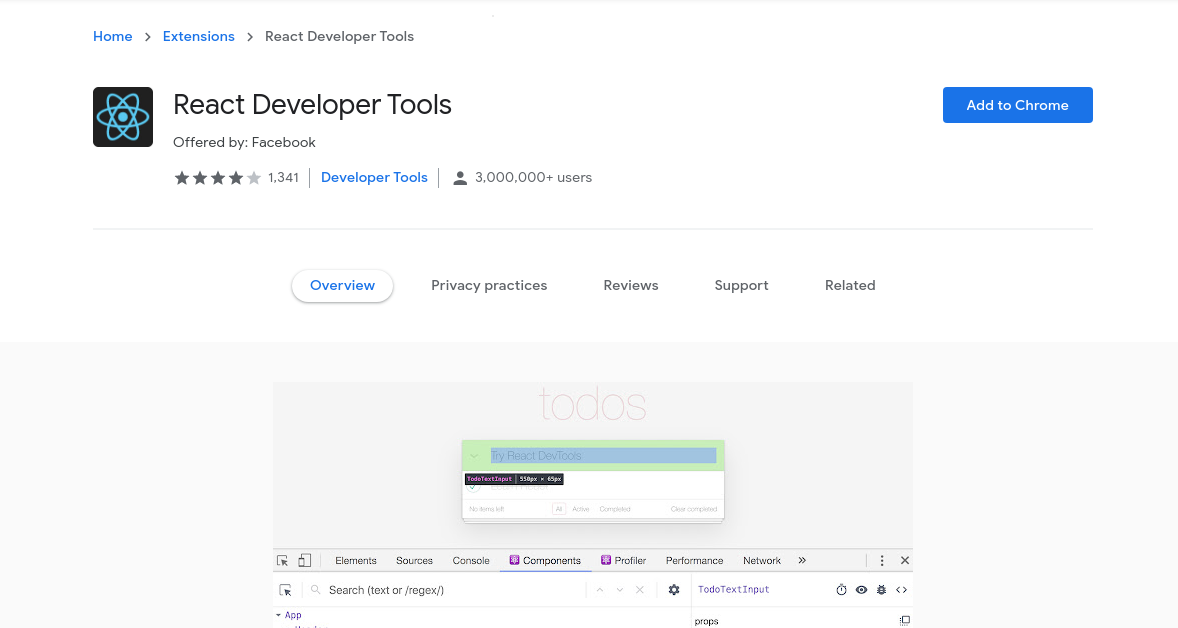 Once it’s intalled in your browser, you have it available in the list of chrome extensions, and to have a handy shortcut icon for easy access, you can click the gray puzzle piece icon in the top right corner of the Chrome browser. This will open a dropdown where you can then pin it for the extensions’ shortut icon to appear.

Next, let’s open a live site that we know for a fact is using React: the official docs site: https://reactjs.org/.

Notice how the React extension’s icon changes color from a washed out, light gray version (on sites where React is not used), to the full-color version on sites like the official docs site (where React is used).

To do this, we’ll use a very popular tool: Create React App.

Before we can use this tool, we need to be sure that our system has the minimal required versions of Node.js and NPM installed, so let’s open a folder where we want to install our React app, and let’s open the bash console, pointing at this folder.

Now we’ll verify our versions of Node.js and NPM are within minimum requirements:

In my case, I got the following output:

Next, we’ll use the npx utility to run create-react-app. Note that npx stands for “Node package executable”.

Running the above command produces the following output:

The (y) part means that pressing the y or the ENTER key will answer the question in the affirmative. So let’s do that, and the installation process will begin.

Here’s the output of this process: 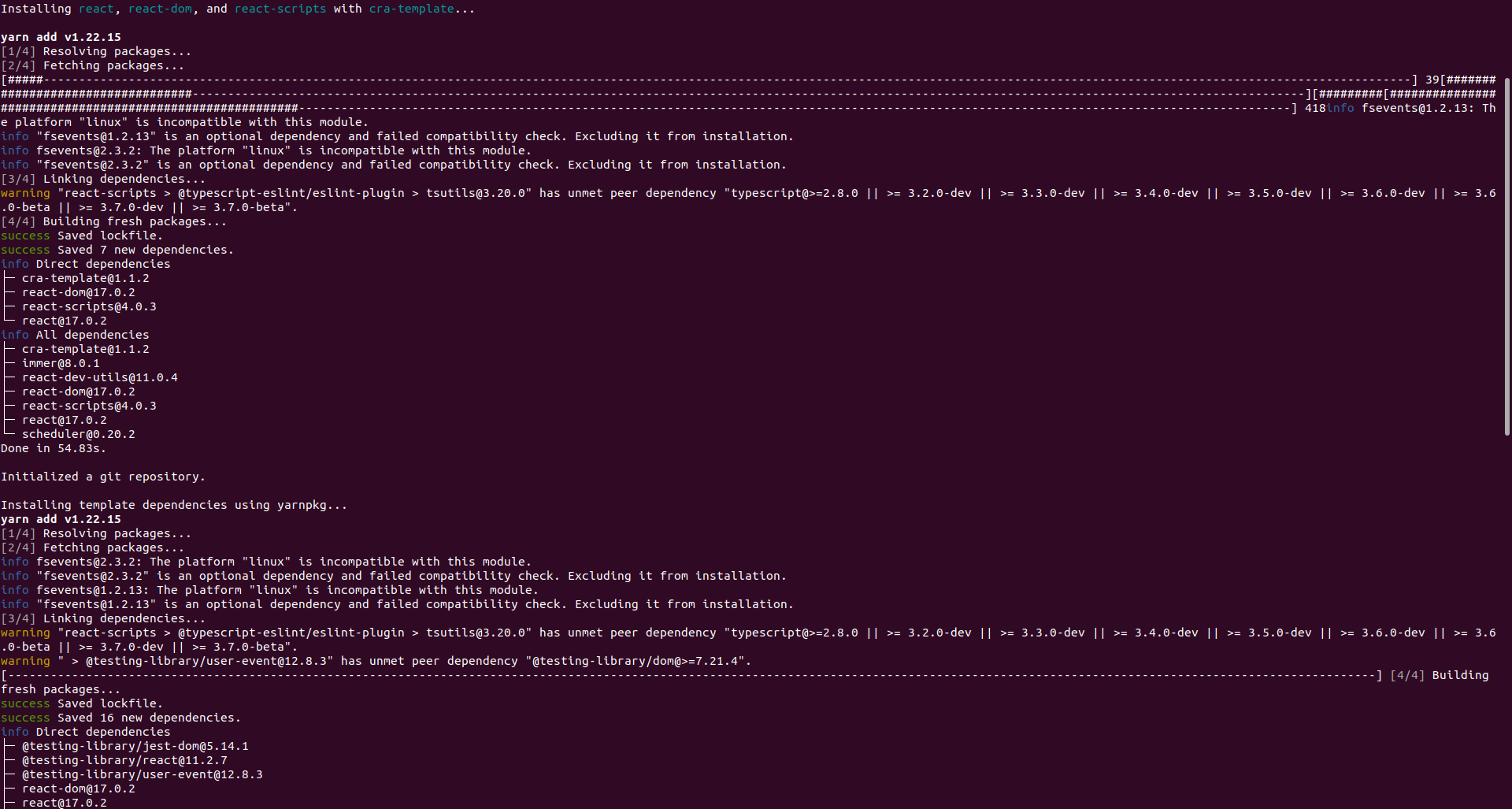 The entire output is about two HD screens tall.

The output completes with the following lines:

Great! Everything is setup as expected. Let’s run this default app in the browser.

Run our default React app and examine it in the browser

Before we proceed futher, let’s inspect what is it that the npx create-react-app simplest command produced.

Let’s get our bash console window in focus, and run these two commands:

Here’s the output in the console:

The yarn start command also opens our system’s default browser automatically. On my system, that default browser is Mozilla Firefox, but we can also open it in any other browser, by navigating to the following URL:

This is what should appear at the above URL. 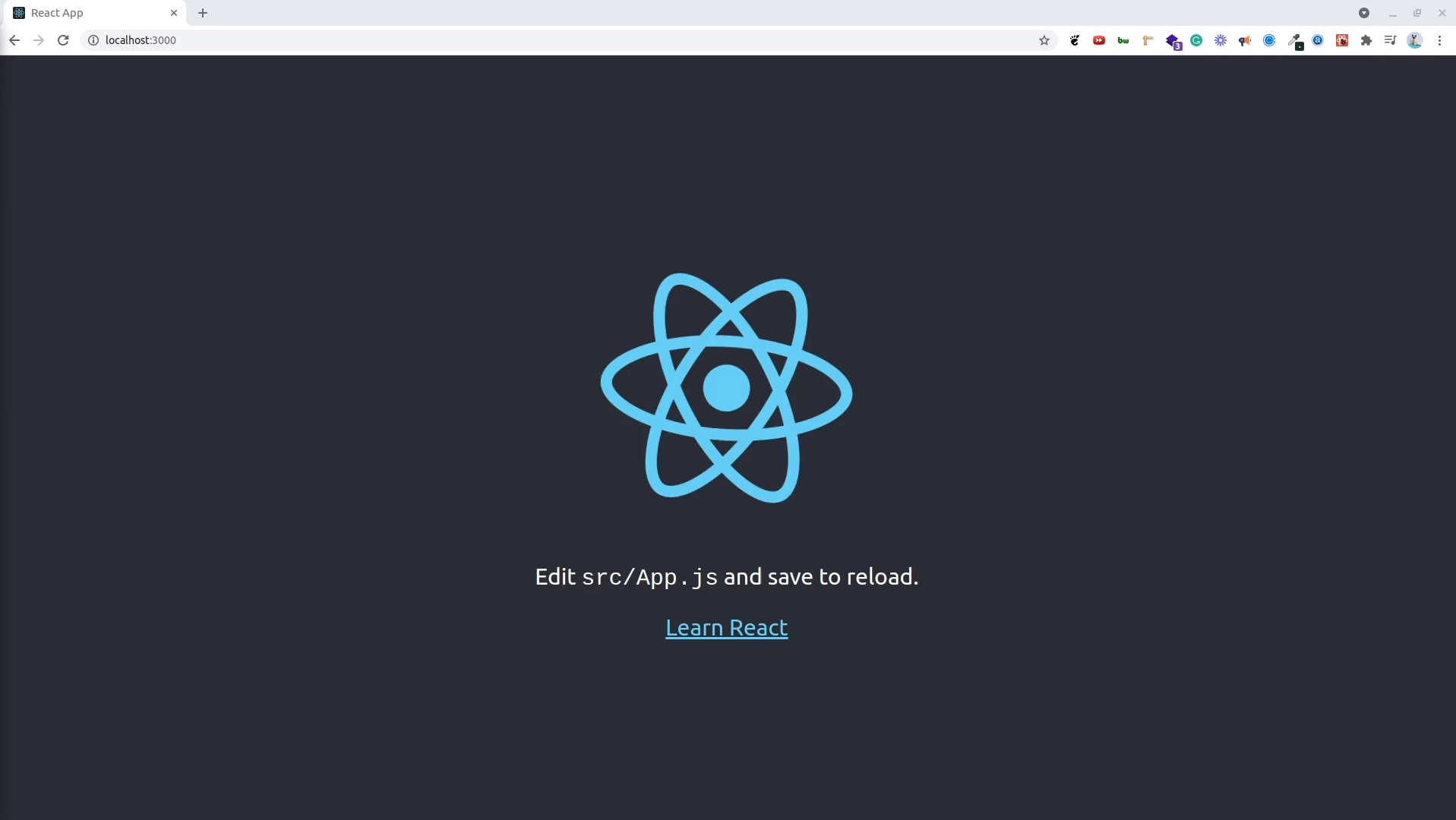 While we’re still in the browser, let’s also open React Developer Tools, to get a feel for how they look.

So let’s just press F12, or CTRL + SHIFT + i keyboard shortcut, or right click anywhere on the page and then choose the Inspect command on the contextual menu that pops up.

Either of the above ways of doing things will open up the Chrome browser’s developer tools. Now it’s just a matter of clicking on the Components tab to make it active. 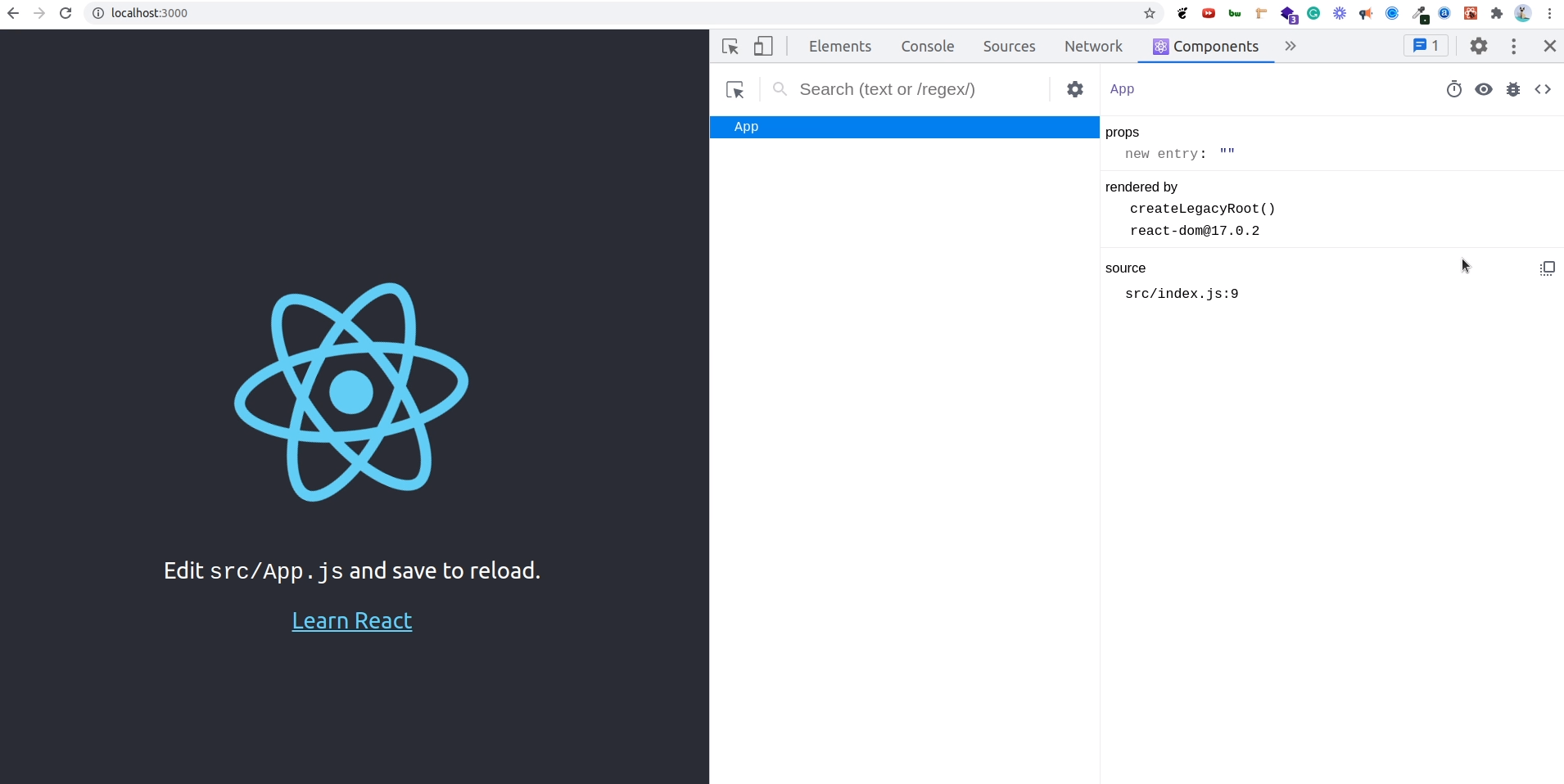 There’s also another tab that we can use, the Profiler tab. Here’s a screenshot of navigating to it. 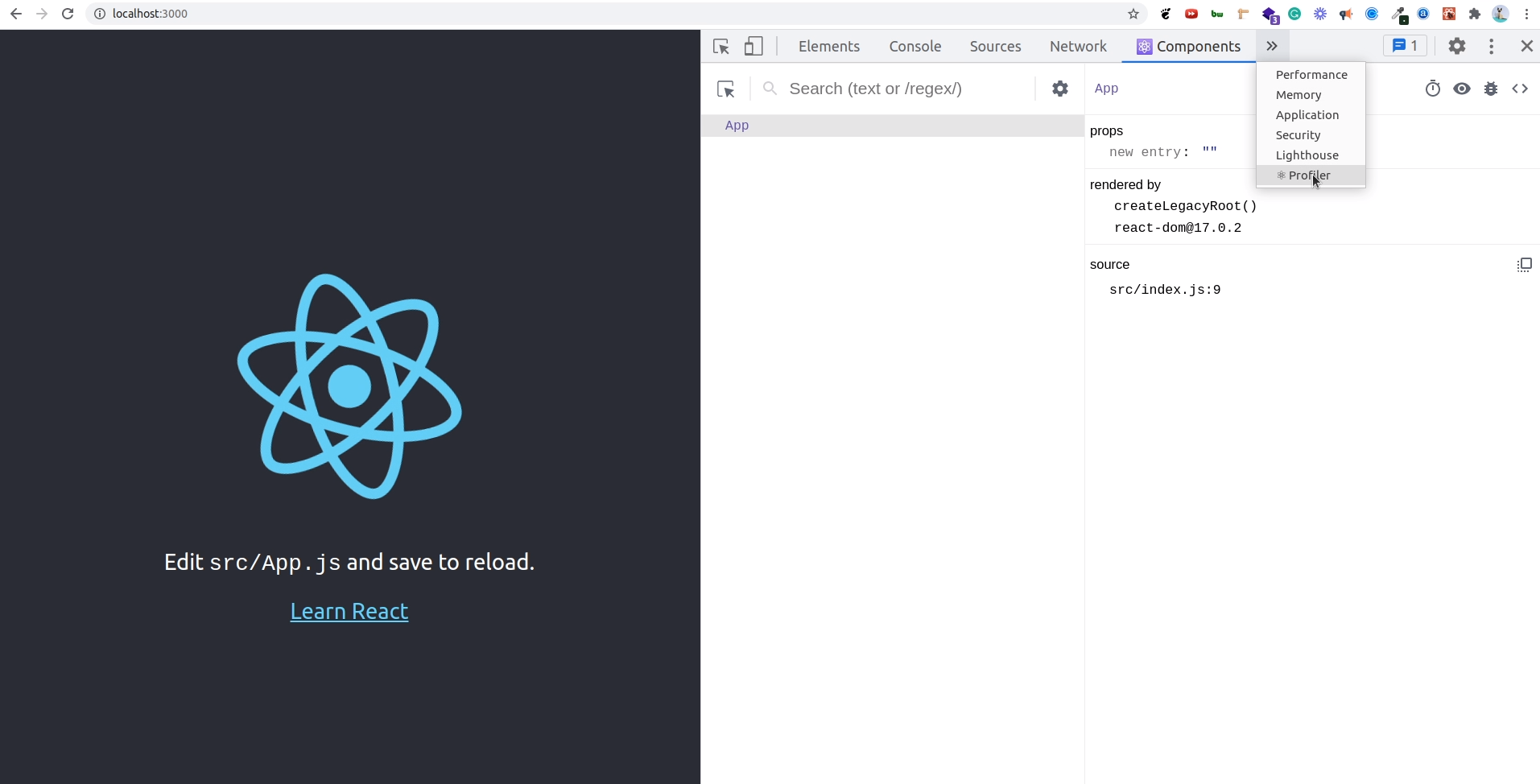 And here’s the screenshot of the Profiler tab being open. 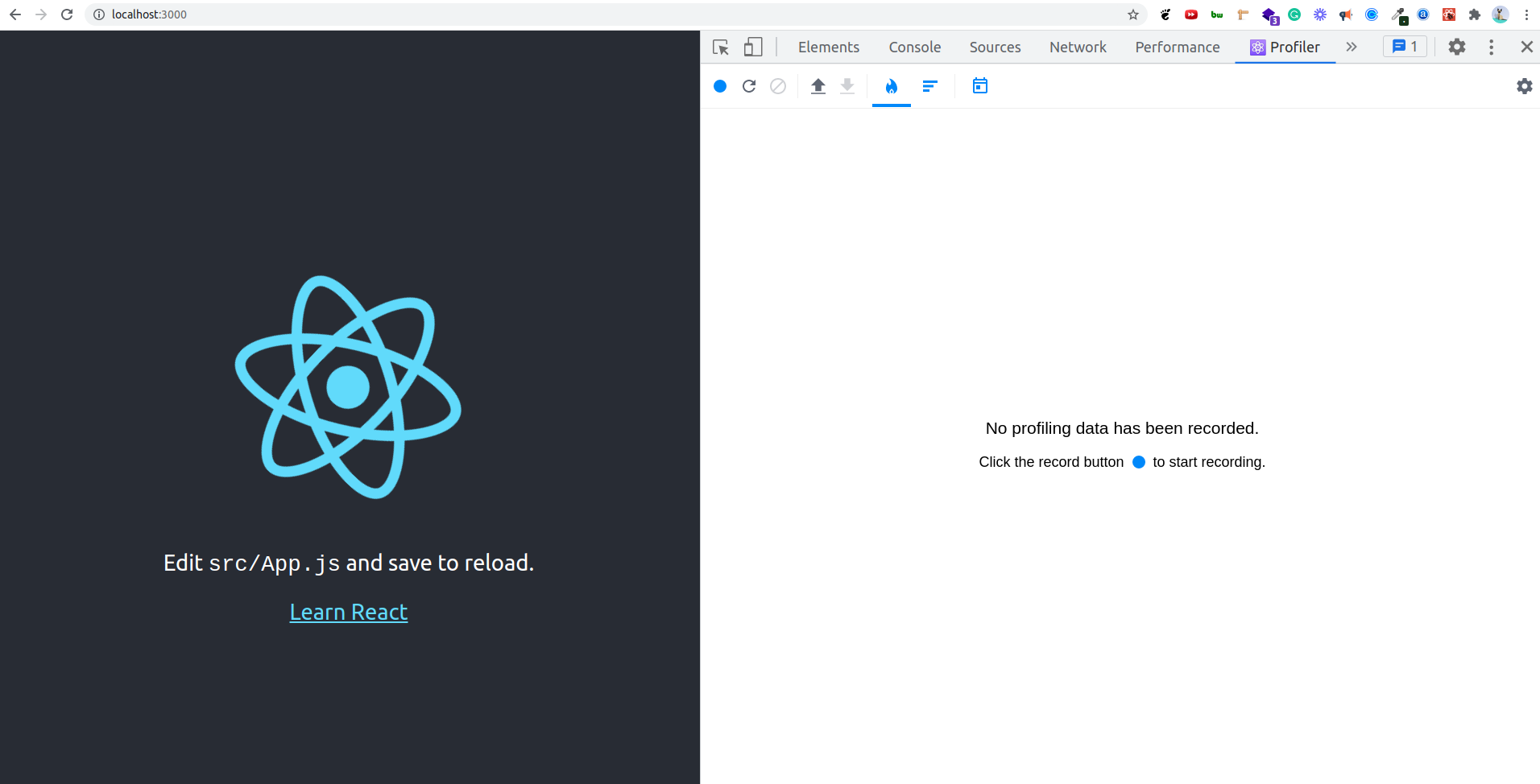 Next, let’s discuss what happened when we ran the npx create-react-app <appName> command.

What happens when we run the npx create-react-app command?

Besides the simple prompt we got asked about continuing with the app setup, some additional important things happened when we ran the command from this section’s heading, namely:

Next, let’s inspect the structure of our React app.

Now’s as good a time as any to examine the code behind the above screenshot. We can open the installed React app in our code editor: VS Code.

Still in the console, to open the entire project in VS Code, let’s run:

Right now, there are no files open, but we can see the structure of the entire app in the file explorer in the sidebar on the left: 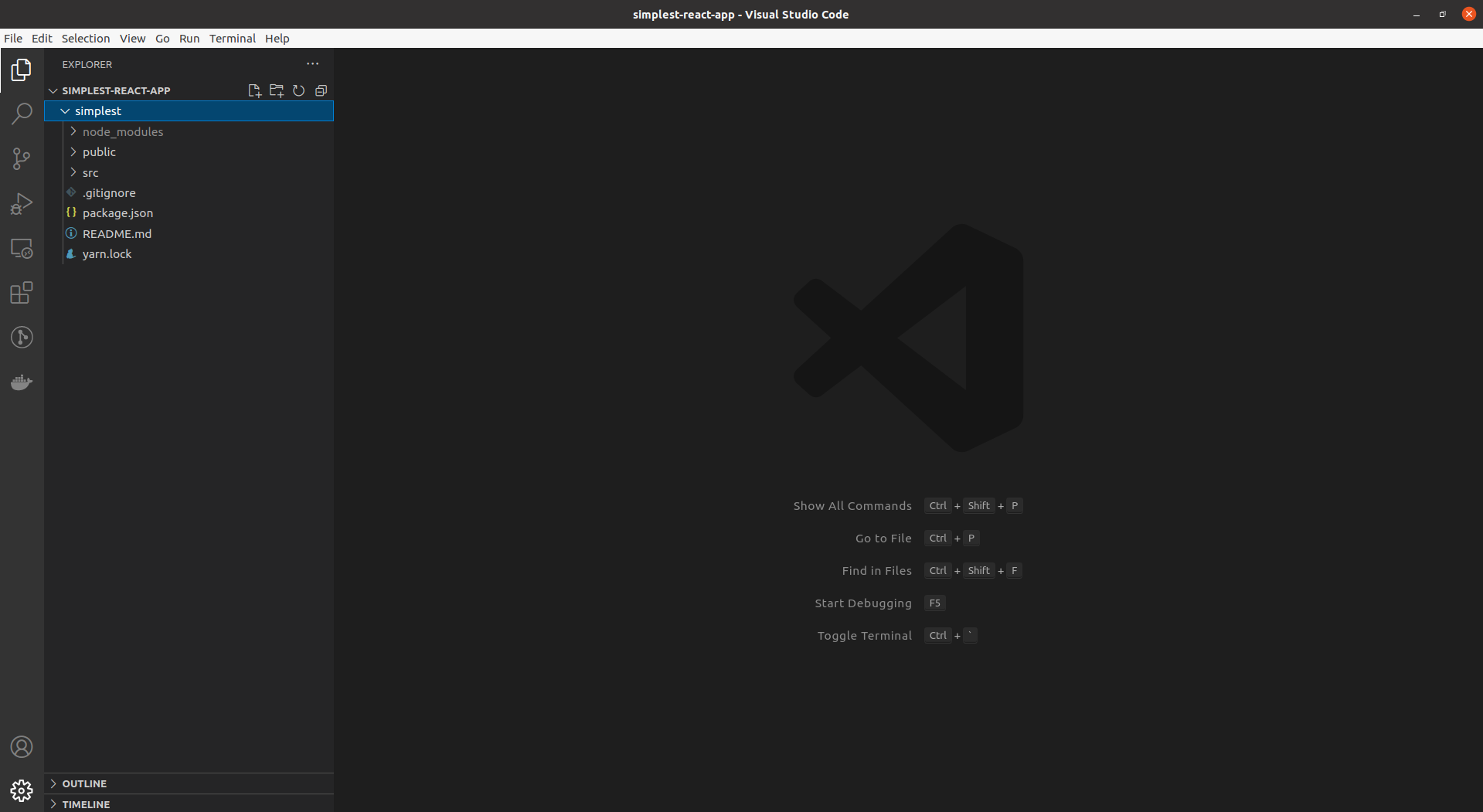 Let’s have an overview of all the files and folders included in our React app, so that we have a good starting point for further exploration.

Our default React app has the following folders at the root of the project:

It also has the following files:

The favicon.ico file is the little icon that will appear in our browser’s tab - when the app is open in the browser.

The index.html file is where React app will inject the entire code for the app, and where all the dynamic updates to the view will take place.

The logo192.png and logo512.png are just two versions of the same logo file (the one that rotates on the screen of the default React app).

The manifest.json file’s purpose is defined in one of the index.html file’s HTML comments:

Simply put, when a mobile user adds a shortcut to our app on the home screen of their phone or tablet, the manifest.json file is used as the source of information about names, colors to use, and the app’s icon on the home screen.

When our web app is added to user’s home screen, it is this metadata which determines the icon, theme colors, names, etc.

The robots.txt file instructs the search engine bots which URLs they can access on a website. This has more to do with “load balancing” than with preventing Google indexing. To block indexing, we use the noindex keyword - but that’s an SEO story - and it’s out of scope.

The /public folder holds the static files, which will not change when we upload them to production. This allows them to be cached once, and reused for as long as needed. In other words, webpack doesn’t update them on builds like it does with the files in the /src folder.

The /src folder holds the essence of our React app. That’s where all the dynamic files are. These files are updated by webpack by appending a unique hash whenever there’s a new build. This allows for cache busting.

The App.css file holds the styles for the App.js file (i.e for the App component).

The App.test.js file is the file for testing our starter app.

The index.css file holds general styles - styles not related to any particular component.

The index.js file is used to render the component. We can also optionally use it for service worker registration. This is the first file that gets run whenever we refresh our web app in the browser.

The logo.svg file is the logo file (used by App.js in the starter app).

The reportWebVitals.js file is using a third-party library to measure the performance of our app in relation to the UX for our site’s visitors.

The setupTests.js file is used for running tests from the cli.

The overall configuration for the React project is outlined in the package.json. Below is what that looks like:

Inspecting the contents of package.json

Another way to get a quick overview of our app is to inspect the package.json file.

Here’s how this file looks like in our starter app:

In the above JSON file:

Arguably, the most important part of the above JSON file is the dependencies entry, listing our apps dependencies:

Let’s now play around with our default app.

We’ll begin in an unlikely place: By passing the console.log as the parameter to the reportWebVitals() method at the very bottom of the index.js file:

Next, let’s open the app in the browser at localhost:3000 and inspect the console.

Here’s what we’ll get:

Alright, so now we’re at least somewhat familiar with what the web vitals does, let’s take a completely different approach, and comment out as much of the index.js file as we can:

In other words, without all the fluff, we’re boiling down our file to this:

What we’re doing above is, we’re “mounting” our React app into the element of the DOM that has the id attribute set to root.

We’re at the bare minimim now in our index.js file. Notably, we’re not even importing React itself.

We’re only using the ReactDOM library in index.js.

Let’s simplify the app even further, by deleting the logo.svg file.

Now we need to reflect this change in App.js. Here’s the original file:

And here’s the updated, minimalist version:

Now our app is as simple as it can get. We could, optionally, remove the testing files and the webVitals.js file altoghter, but that would probably be too much. After all, at this time, we’re focusing on the actual code that will be included in the rendering on the screen.

The result of our updates now looks as follows:

This is as simple as it can get.

There’s another way to use React: with a CDN, which we’ll do next.