In this eighth post in our series of articles on building Angular 8 layouts with ngx-bootstrap, we’re covering the typeahead ngx-bootstrap component in Angular 8.

If you are a complete beginner, you might wanna read the series from the very first article.

Here is the list of posts for the entire series:

To see what we’ll build, have a look at the completed app in Stackblitz.

If you’ve read a few of the previous articles in this series, you’ll notice that we’ve been using a tried and tested learning tool, in the form of a recipe: a series of steps that we need to take in order to stay on course of working with our components in ngx-bootstrap and Angular 8.

The steps are outlined in several places in this article series, such as this link here, which gives us a nice overview of steps that we need to take.

If we further simplify the recipe, we can boil it down to 3 steps:

To keep our recipe short and simple, we’re assuming that ngx-bootstrap dependency and Bootstrap 4 styles have already been added. For a detailed instruction on how to do these two things, refer to this section of the second post in this series.

So, we’re beginning to customize the default Angular 8 Stackblitz app with this commit.

Next, we’ll follow the three steps outlined above to add the typeahead ngx-bootstrap component to our project.

1. Adding the component’s folder and files

Following the ngx-bootstrap typeahead’s reactive example, here’s the contents of the class file:

Along the same lines, here’s the content’s of the template file:

The app as it currently is, can be found in this commit.

2. Import the usage module, and the class component

As it says in the docs, we’ll import the BrowserAnimationsModule and the TypeaheadModule, and we’ll install the @angular/animations package, as the Stackblitz app prompts us to do:

Once we save the changes, we’ll get this error:

We’ve seen the exact same error in the previous post in this series, and the solution is explained in detail there. What it boils down to is that in order to use formGroup, we have to import the ReactiveForms module into app.module.ts, like so:

After saving the changes, we can see our update’s commit here.

3. Use the new component’s template as a custom HTML tag

Inside app.component.html, it’s time to use our custom HTML tag, by adding it to the very top of this file, like so: 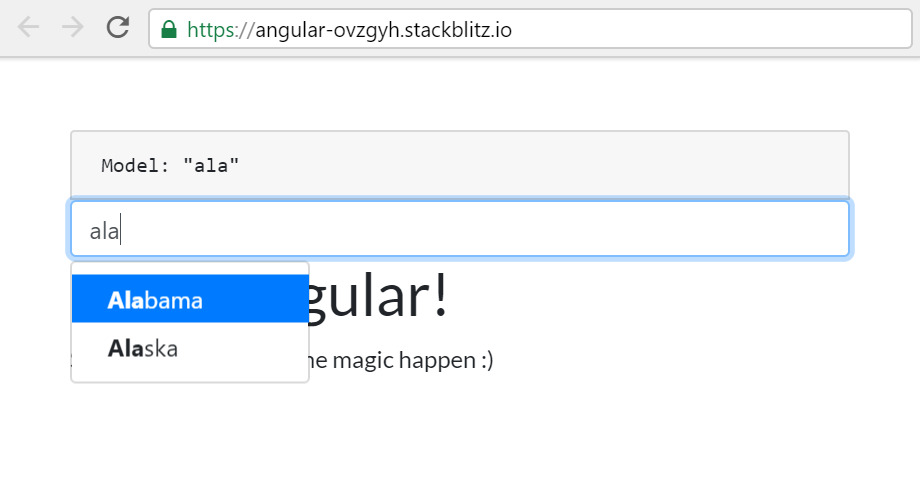 Here’s the Github code for our completed typeahead example.

This concludes our series on using ngx-bootstrap with Angular 8 on Stackblitz.