Objects in JavaScript in Depth

All the stuff about JavaScript objects in one single place!

In this article, we’ll take a really detailed look into objects in JavaScript. 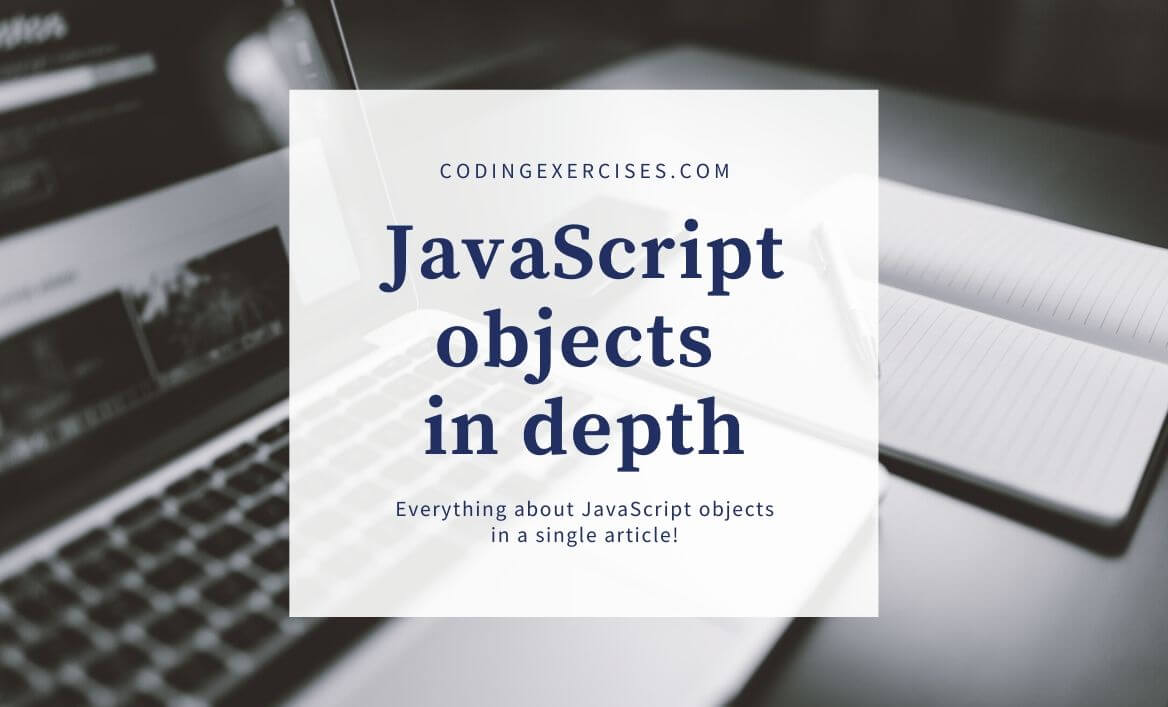 What are objects in JS?

In JavaScript, objects are simply collections of key-value pairs. These key-value pairs are known as object properties. The keys are known as “property names”, and the values can be various data types: strings, numbers, booleans, arrays, functions, and other (nested) objects.

If an object’s property’s value is a function, then that property is called a method.

We’ve just added a brand new empty object to memory. However, we have no way to get it back from memory, so let’s add a binding to our object, by using a variable:

In JS, this is really easy to do:

Currently, we don’t have any properties in our object. To work with object properties, we need a way to access them. We do that using object accessors.

We use object accessors to perform CRUD operations on our objects’ properties. There are two ways to access an object’s properties:

Let’s create a new property in our car object:

Now we can inspect the car object again…

…and we’ll get this:

To update an object property, we just re-assign it to a different value:

Finally, we can also delete a property, like so:

Maybe you’ve thought to yourself at this point: “great, that means I can just set an object’s key to undefined, and that’s gonna be the same as if I’d deleted it”. Actually, that’s not true. If you try to delete an object’s property by setting its key to the value of undefined, that’s exactly what you’d get:

Using brackets notation, we can use variables to access object keys:

Using ternary expressions to determine the value of a property

This is entirely possible. We do it like this:

Here’s how to do it:

However, since our key has a space in it, we can’t acess it with the dot notation:

Trying to do the above will result in the following error:

To list out the object properties, we need to use the for in loop:

Here is the output:

The code above doesn’t check if only the bike object’s properties are iterated over. To do that, we need to include the built-in hasOwnProperty method:

We don’t always have to check if we’re iterating over object’s own properties. Why? Because some methods that exist on objects do this filtering for us. One such object method is the keys method.

As demonstrated in the code above, Object.keys returns an array of the keys of the object we give it as argument. We can then iterate over these keys, for example, like this:

We could have written it using the for of as well:

Why the for of and not for in? Because we’re looping over an array.

ES8 brought some great additions to what was available (as described above). Specifically, we have two new methods on the Object now:

The Object.entries() method brings the game to a whole new level:

The above code will return:

Remember that the Object.values and the Object.entries are ES8 methods, so if your site visitors are using older browsers, you might need to take this into account and address this possible issue accordingly.

In JS, as one of many JavaScript’s optimizations, if you assign an existing object to a new variable, you’ve just created a new binding (i.e a new variable), but this new binding is still pointing to the exact same object.

The trick is that, if you update any of the object members using any of the bindings, you are changing the “underlying” object directly. In other words, regardless of which binding you’ve used to update an object’s property, this update will affect all the variables that point to that object.

Here’s an example to see this in practice.

Now, let’s assign the sportsCar oject to another variable:

Now, let’s update the speed of our porsche:

Finally, let’s prove that the speed property was also updated on the sportCar variable:

Once you really understand how the pass-by-reference of objects works in JavaScript, this behavior becomes the expected, normal behavior. You know that this is just the way that it works - it becomes normal and expected.

Contrary to objects, primitives are “pass-by-value”, which means that they are pointing to completely separate places in memory. Let’s run the previous example, only this time we’ll use primitives:

Let’s pass an object to the console.log function:

If we ran the above code, our object will be logged to the console:

If we slightly changed our code to run console.table instead of console.log, we’d get this back:

We can draw two conclusions from the above:

Now we can define a custom function declaration that expects an object:

We can also set the default values for the passed-in object properties in our function declaration’s definition:

This way, we can call the printDetails function without passing it a complete object. Actually, it will work even if we pass it an empty object, like this:

Or we can pass it only some parameters, and leave out others:

To access the object properties from inside our object’s methods, we use the this keyword, like so:

That’s it. Accessing object variables from inside of object methods is easy.

The Object.create method is another way to create a new object. The new object is also linked to an existing object’s prototype.

Thus, in pseudo code, we can write it like this:

Here is a list of reasons to use the Object.create method:

Way, way back, in 1996, when the JavaScript language was still very young, it only had these built-in objects: Date, Math, String, Array, and Object.

However, over the years, JavaScript has grown, and today there are many, many, built-in object in JavaScript.

Since it would be too difficult to list out all of the objects in JavaScript in detail, here’s just a quick overview of built-in JavaScript objects, grouped by category:

Now that we see that it’s a big list, but fortunately, still a finite one, it means we can make a long-term plan to learn about the ins and outs of all these objects - in due time.

For now, let’s go back to the basics and cover just a few of the more important built-in objects in JavaScript: String, RegExp, JSON, and Math objects.

The String object wraps the primitive string data type to give it superpowers: the ability to have methods, just like other objects.

To build a String object, we use a constructor with the keyword new:

The String object comes with these properties:

The String object also has a number of methods:

Here’s an example for the String.prototype.match method:

The String.prototype.replace method follows this syntax:

Here’s an example for the String.prototype.replace method:

In the previous paragraph, we used a sequence of characters, @example.com. One likely use case would be form input validation. If a user was trying to log into an imaginary www.example.com, and if that user needed to provide an email address that matches the domain, we’d need to check the form input for existance of @example.com.

Another use case for regular expression is in string searching algorithms, for example, running a search and replace operation in a piece of software.

Remember the built-in Object object in JavaScript? We can build a new object from this prototype, by using the object literal syntax:

Similarly, we can use the built-in RegExp object to build a new regular expression from the RegExp prototype:

And just like we need to add a binding (variable) to store the object literal, we need to do the same for the RegExp object, if we want to work with either of them. For example:

Now we can find the pattern (i.e the sequence of characters) in a larger string:

The test method on our pattern RegExp object will return true if the string that we pass it contains the pattern. Otherwise, it will return false.

The test function returned false this time because the word “example” doesn’t exist in our fullText string. Note that the test function is somewhat similar to its String object’s match method. The difference is in what gets returned: for the String.prototype.match the returned value is an array with matched characters, while the RegExp.prototype.test returns a boolean.

The Date object stores data about a specific moment in time. For example:

There are several formats we can use to add new dates. For example:

The toString method exists on all objects, including the Date object. Thus, we can convert our dates from objects to strings, like this:

Although it’s possible to write the argument passed to the date constructor in a variety of formats, a more consistent approach it to pass each piece of information as a separate argument, like this:

Now we can re-build our y2k date, like this:

JSON is utilizing the fact that JS objects are so easy to construct, with simple key-value pairings. In 2001, when he invented JSON, did Douglas Crockford realize that it is be a great way to store data? Who knows.

The important thing is, JSON is very widely used for data transfer in APIs, as well as data storage and retrieval in web apps in general.

There is a slight difference between regular JavaScript objects and JSON objects. While JSON format is syntactically correct JavaScript code, it still needs to follow several rules to be considered valid JSON:

For some additional JSON quirks, here’s an interesting, somewhat advanced article on the topic.

An important thing to remember: JSON is just a string. Specifically formatted string, but string, nonetheless.

There is a global JSON object in JavaScript, and it comes with its own methods that helps us work with JSON.

One such method is parse, and using it, we can convert a JSON string into a JavaScript object:

We can also run the stringify method to convert a plain JavaScript object to a JSON string:

If we run JSON.stringifyon an object that has methods inside of it, the stringify method will just skip them. For example, the below object’s sailAway method will simply be ignored, and not included in the resulting JSON string:

A practical use case for JSON strings is to, for example, save application data inside localStorage of a user’s browser. Of course, to store an object of data we first need to JSON.stringify it, and to retreive it so that our application can use it, we need to run the JSON.parse method on it.

The Math object also comes with a number of built-in methods:

Note that the Math object has no constructor and we cannot instantiate it before we use it! We just straight up use it.

Using the Math object, we can easily emulate a six-sided dice:

On line 2 of the above code, we get a random number between 0 and 1 with Math.random. We then multiply it by 6, and finally we store it in the randomNum variable.

On line 3, we get rid of the decimals by running Math.floor on randomNum, and we assign the new number to the existing randomNum.

On line 4, we log the value of randomNum to the console.