The Anatomy of a JavaScript function, part 5

Revising all the ways to define a function in JavaScript

In this fifth post in the series of posts titled “The Anatomy of a JavaScript function”, we’ll revise all the different ways of defining functions in JS. 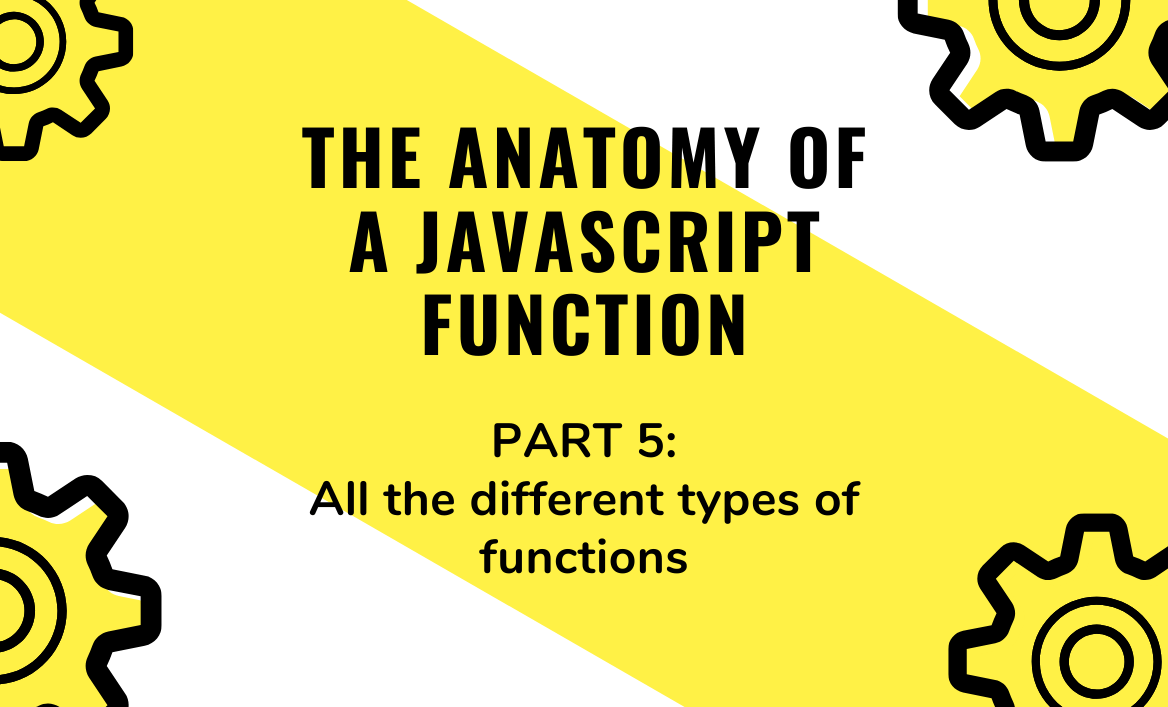 Earlier in this series of articles, we’ve learned that functions are sort of like pre-built machines that we build once and run as many times as we need.

There are several ways of defining functions in JavaScript - i.e. of building these “code machines”. Each way has its strengths and weaknesses.

Let’s look at each of these in detail. There are many additional gotchas and caveats to all these different types of functions, so for a full list of all the possible scenarios, scroll to the bottom of this article.

Here’s an example of a function declaration without params:

Here’s an example of a function declaration with params:

Function declarations are hoisted and they have a built-in array-like arguments collection. Hoisting makes it possible to call a function before it’s declared, like this:

This “first pass” is one of the two passes that the JavaScript engine makes when it deals with our code. The first time it reads our code, it saves into memory all the variables and function declarations it finds. This is what’s sometimes called the “creation phase” of setting up the execution context for a given function.

After this “first pass” (that is, after the “creation phase”), the JavaScript engine runs our JavaScript code line by line. This “second pass” is what’s called the “execution phase”.

1a. Conditionals and function declarations

There are JavaScript engines that will throw an error if we define a function inside a code block, between the curly brackets, such as inside statements like if, for, and while.

What makes matters even worse is that this behavior is sometimes error-free in “sloppy” mode in JS, and only shows up when in strict mode. For example:

On line 14 of the above code, we are running itsTrue(), which results in this:

This is happenning because we’ve defined the itsTrue function inside a conditional code block.

However, this is perfectly legit in sloppy mode:

No error is produced by the above code.

A way to go around this issue is to use a function expression instead of a function declaration, like this:

In the code above, we cheated, kind of. How come? Well, we declared the isItTrue as a variable, outside of the if...else conditional statments. Then, inside each of the conditions we specified, we use a function expression, to assign an anonymous function to our pre-declared isItTrue variable. Problem solved!

To write a function expression, a function is assigned to a variable:

There is a bit of a gray area regarding the above explanations, however. To understand why, let’s discuss the naming of functions in a bit more detail.

Each function object comes with the name method, and thus we can check the value of a function’s name. Anonymous functions don’t have a name, so the value returned from the name method in this case is an empty string: "".

The above code proves that the exampleFunction3 is not really an anonymous function. This is because the JS engine can deduce the name of exampleFunction3 because we’ve assigned it to a variable.

2a. Function expressions as IIFEs

These are useful when we want to define and run the function at the same time, and we don’t need to re-use it:

The example above is using an anonymous IIFE. It’s ok that IIFEs are usually anonymous, because the way they are written serves one purpose: to not allow scope bleed, i.e. to keep the code inside the IIFE as self-contained as possible. Entire JavaScript libraries are written using the IIFE pattern.

As a side note, IIFEs were extremely popular before using JavaScript modules became commonplace. However, even that being the case, IIFEs are still a valuable tool in your arsenal.

Additionally, since they are self contained, making IIFEs named rather than anonymous might seem to not have any additional benefits. However, that is not entirely true. Consider this example:

Now we have an IIFE function that returns a 1. However, we can easily make that more versatile:

Here are a few important facts about function expressions:

This is a good time to mention the one major difference between function declarations and function expressions.

2b. Function expressions as object methods

Another way to build a function expression is to define it as a method of an object:

Now we can work with our car object like this:

Function expressions as object methods are a very common use case in JavaScript.

Shorthand object methods are a way to define function expressions inside object literals, using ES6 syntax. Here’s our car object from the above example, only this time re-written with shorthand methods:

The shorthand syntax looks almost identical, except for the fact that we omit the colon character, i.e. the :, and the function keyword in shorthand methods.

Actually, shorthand methods are so great that they’ve got another trick up the sleeve: computed properties syntax.

To understand how shorthand ES6 methods work with the computed properties syntax, we’ll work with our car object again. This time, there’s a twist: we’ll return it from a function.

Note that while the below function is a function declaration (not a function expression!), we’ll build up to having shorthand computed properties methods inside of it.

But let’s not get ahead of ourselves, and instead, let’s take things one step at a time.

First, we’ll write a function declaration, and call it getACar. This function will return an object:

So far so good, we’re just returning our car object, which is exactly the same object like we had before. We can now call the getACar function, and it will return our car object.

We can even call a method on our returned object, like this:

Now let’s extend the returned car object, like this:

Now comes the fun part: to access a property in an object, we can either use the dot notation, or the brackets notation.

This means that the following syntax is completely legitimate:

The returned error is completely expected, since we haven’t declared the year variable anywhere. Let’s fix the error, like this:

Now, trying to access the carType property returns undefined instead of “sports car”. Just why that is so, can be seen if we just inspect the entire object:

This brings us to the point of this section. Just like we can use computed properties in the above use case, we can use them on shorthand object methods, like this:

A function expression can be used as a callback. For example:

Let’s now discuss why the above callback function is considered a function expression.

Arrow functions can also be used inside function expressions, as follows:

There are a few gotchas for arrow functions:

2f. How does the JavaScript engine load functions into the execution context?

Function expressions are loaded at run-time, once the engine reaches that specific line of code (after the execution context’s creation phases has completed).

That’s why you can call function declarations in any part of your code, even at the very top of the file, while function expressions can only be called once they’ve been loaded into memory, at run-time, which practically means that function expressions are always called after they’re declared, or they’d throw an error otherwise.

Each and every single function in JavaScript is a Function object. Here’s the proof:

Since a JavaScript function is a Function object, to build a new function, we can just call the Function object’s constructor, using the new keyword:

Inside the call to the Function object’s constructor, we list the parameteres, as strings.

Interestingly, we even pass the body of the function into this list of “parameters as strings”:

Functions built using the Function constructors have the same behavior as function expressions:

A possible situation in which a function constructor might be used is to return the global object, be it window or global:

Why does this work? It works because functions built with the function constructor are always added to the global scope.

In JavaScript, functions traditionally have the run-to-completion implementation, meaning, once a function is ran, it cannot be “paused” - it runs until all the code in the function body is executed.

This traditional behavior was changed with the introduction of generator functions.

In JS, a generator function can be stopped at any point during its execution, then, at a later time, you can call it back and it continues executing from where it left off.

The above example shows that a generator function is the same as a function declaration, save for the additional * right after the function keyword.

Here’s the full list of all the ways we can define functions in JavaScript:

This completes part 5 of The Anatomy of a JavaScript function article series.