Build a Bootstrap layout in React

We’ll use this chapter to practice everything we’ve learned today, in a new setting.

This will have two great results for our React learning:

React is all about components. Those components being composable is one of its strengths.

We’ll code our layout on codepen, starting with a navbar.

Thus, let’s navigate to the official site of the Bootstrap framework, version 5, and let’s locate a navbar example that we can copy.

Now we need to:

Here’s a simplified look at how that works:

Obviously, we’re just showing a “prototype” of how our navbar works.

Now we need to replace the <h1>Main Menu goes here</h1> with the entire contents of the navbar.

However, before we do that, let’s plan our site a bit more.

We’ll keep things relatively simple and add only the jumbotron and the footer to it.

Thus, our site’s full, non-working “prototype”, built as React components, will now look like this:

Now it’s all a matter of adding the individual component’s HTML code inside each of the returns.

Additionally, we also need to include the proper version of the Bootstrap framework to our codepen.

We’ll be adding the Bootstrap 5 framework from a CDN. We’ll achieve this using Codepen’s built in functionality, similar to how we’ve setup Babel.

Our Codepen is titled A React Bootstrap example.

However, this time, we’ll click the “Settings” button at the very top of our Codepen.

Once we’ve clicked on the Settings button, we’ll get the same settings modal window like we had when we were setting up Babel. Now we can click on the CSS option, and type “Bootstrap” in the search. The result will auto-complete and give us a matching Bootstrap v5.0.2 CDN link. 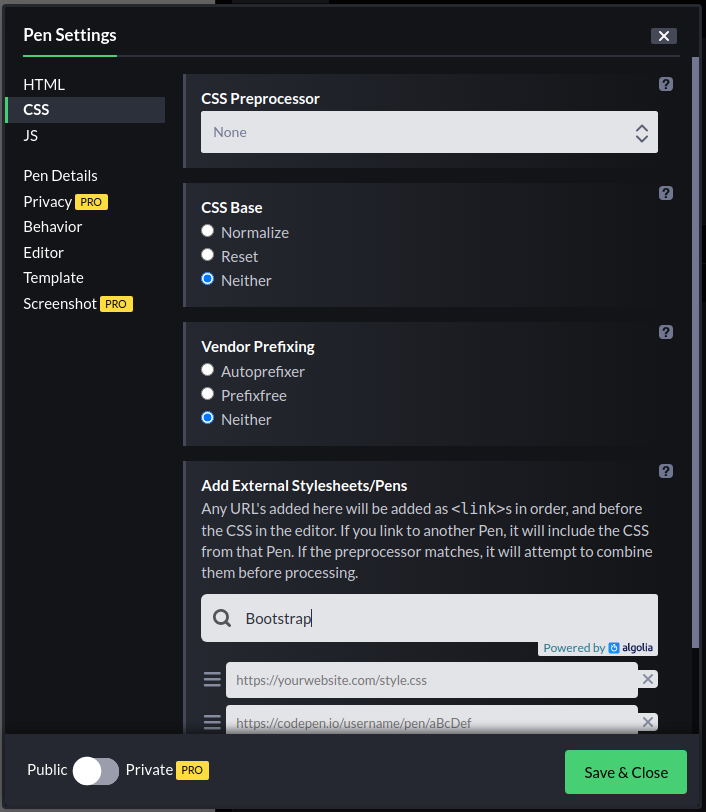 After we’ve added the Bootstrap CDN, the styles on the text should have updated - which is a confirmation that what we did worked.

Adding the Navbar - the MainMenu component

Next, we’ll add the jumbotron.

The jumbotron component has been dropped in version 5.

However, we can still copy-paste its HTML structure from one of the example pages.

Once we’ve copied the relevant code into our component, the Jumbotron component will now look like this:

However, we have “messed up” the ReactDOM.render() call on purpose. And that’s why our app, if left like this, would not render anything - obviously, because we’ve made the error.

Thus, instead of including the MainMenu and Jumbotron as demonstrated above, let’s revise our car page, and how we did things there.

Logically, we can resolve our rendering issue by passing app as the first argument of the ReactDOM.render() call. Of course, before that, we’ll need to define the app variable.

Here’s how we’ll solve it.

To begin with, we won’t touch either the MainMenu or the Jumbotron components.

That’s what’s so great about composability. We just need to focus on putting our components together.

So let’s define the app variable:

And now we’ll render it:

As a quick de-tour, here’s an alternative way to do it:

Let’s add the Footer component too, so that our layout is fully completed.

We’ll copy another element from the DOM - since Bootstrap doesn’t have a separate footer component.

Here’s our Footer component, copy-pasted from the Bootstrap website, and custom-formatted so that the code nicely fits on this book’s page without taking too much space vertically.

Of course, to make our component show, we also need to update the app variable: 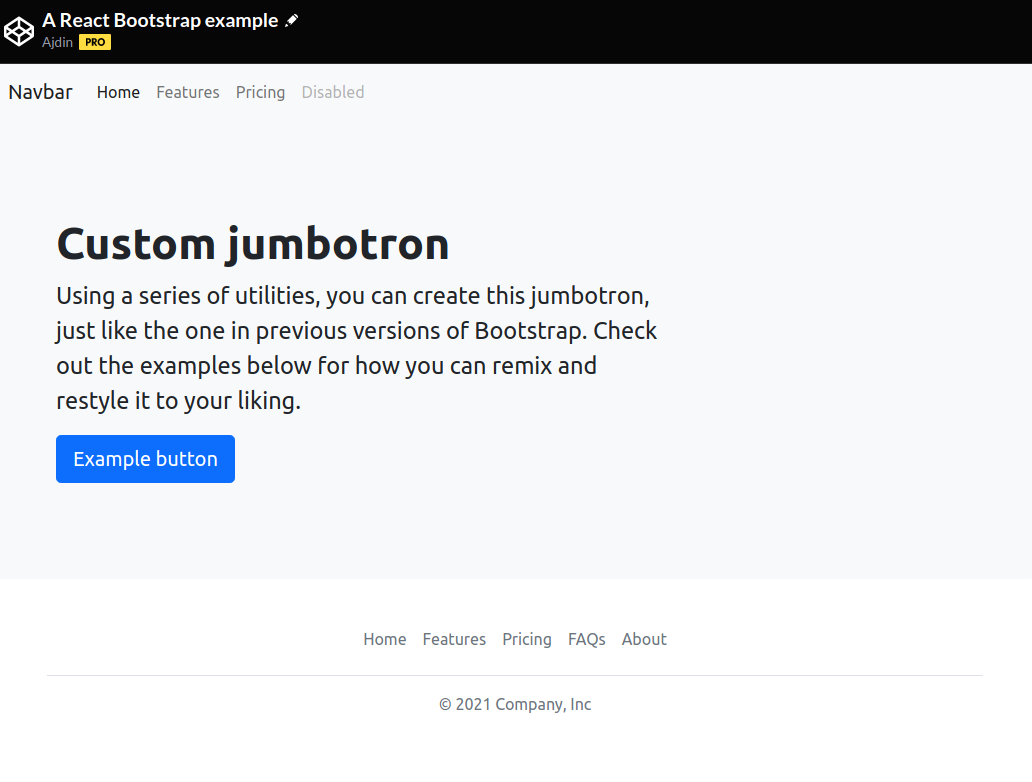 Now we’ll build that layout again, only in our local environment.

This should be a pretty familiar exercise by now:

We’ll get that default starter app in no time. Now let’s start updating our files.

Let’s start with a simple update to App.js:

Now that we’ve streamlined it, we can add our components.

One component per file

Here’s a simple rule: one file, one component.

This is a very important rule. It keeps things simple and organized.

Now that we’re aware of this rule, let’s add another file, and name it, say, MainMenu.js.

We’ll be adding the file to the root of the src folder. 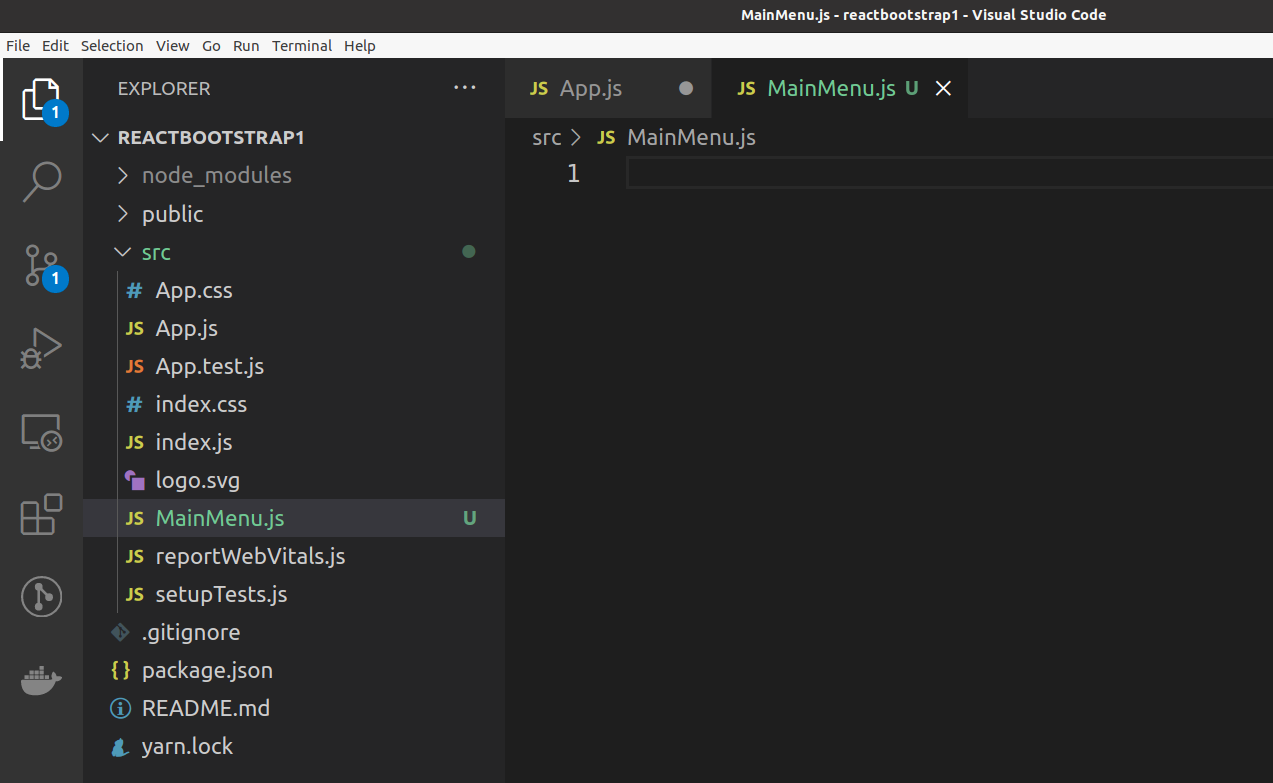 Here’s a screenshot of how that looks in VS Code.

There’s not much guesswork as to what needs to go in this function’s body.

We’ll just copy-paste what we already have in the Codepen, resulting in this:

Basically, we’re taking that component that was only a section of the script file on Codepen, and we’re moving it to a separate file.

No other changes here!

However, to make this actually work, we need to add a couple of additional things, namely, the import and the export:

Thus, our file will end up looking as follows:

This is the “recipe” we’ll follow for all our components.

Note: The reason I’ve commented out the import SomeDependency... line of code above is because our files actually do not have a dependency yet. So I’m leaving it as a comment in all the files to have a reminder that we might eventually need to import something we’ll be using in our app. But we won’t do it now. However, by keeping it as a comment in each of our files, it’s going to sort of stick out like a sore thumb - and that, hopefully, will help us remembering that very often we indeed will have to import a dependency and use it in our component files.

Importing a component to App.js

Back in App.js let’s now replace the first line:

… with an import of our MainMenu component.

We’re no longer using the starter logo anyway, so:

As far as the JavaScript and JSX goes, all of this works.

However, we still do not have our styling.

There’s an actual guide on the create-react-app site.

First, in our console, we’ll run:

Then, at the very top of our index.js file, we’ll add the css from the module:

We should also probably stop the local server with CTRL + c keyboard combination, then run the yarn start command again.

Here’s the result in the browser.

Now, building the other two components should be pretty straightforward.

Adding the jumbotron and the footer component

Let’s add the following code to the Jumbotron.js file:

Next, let’s add the following code to the Footer.js file:

We’ve achieved the same layout as we did earler, only this time, we’ve built it using local setup.

On the next page, there’s a screenshot of our local React app being served in the Firefox browser. With that screenshot, we’ll complete this chapter. 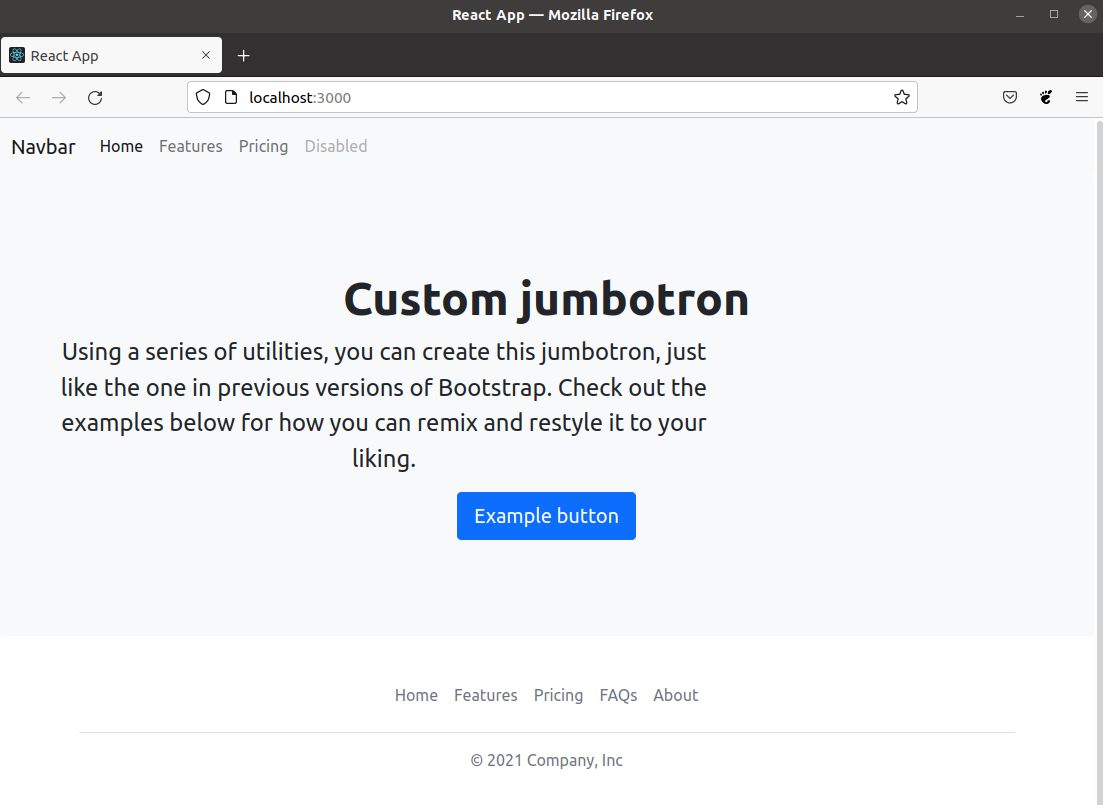