This is the fifth post in this series of articles.

In this article, we’ll continue exploring the CSS display property and how it affects the document flow. We’ll begin by seeing that we can omit adding our custom CSS classes if the style described in that class is the default style of an element. We’ll also see how to override the default behavior of the <span> element. By default, the <span> element is an inline element, but we’ll change it to display as a block-level element - that is, we’ll make it behave just like a <div> or an <h1> behaves by default. Let’s start!

In this video, we’ll alter the display property on HTML elements.

If you like 👍 the video, please hit that like button. Also, please consider subscribing 🥰 to the CodingExercises Youtube channel. It doesn’t cost you anything and it will further improve the channel and this website.

When it’s reasonable not to add a CSS class?

Let’s look at an example that demonstrates this.

Here’s the HTML from the above example:

As we can see, the above code is very similar to the example from the previous post:

Actually, the resulting web page in both code examples looks exactly the same! So where’s the difference?

Comparing the two code examples, we can see that in the current one, we’re choosing not to apply the display-inline class, since the <span> element comes with the display property set to inline by default.

Note that this updated example has the exact same CSS as the previous one.

In the next example, we’ll keep the default behavior on all the block-level elements, and we’ll only override the <span> elements.

Here’s the HTML for the second example in this article.

In this example all the elements are styled as block elements, even though we have two <span> elements on the page. All it took was to add the property: value pair of display: block to our display-block class attribute name.

Here we can see the result of the above code: 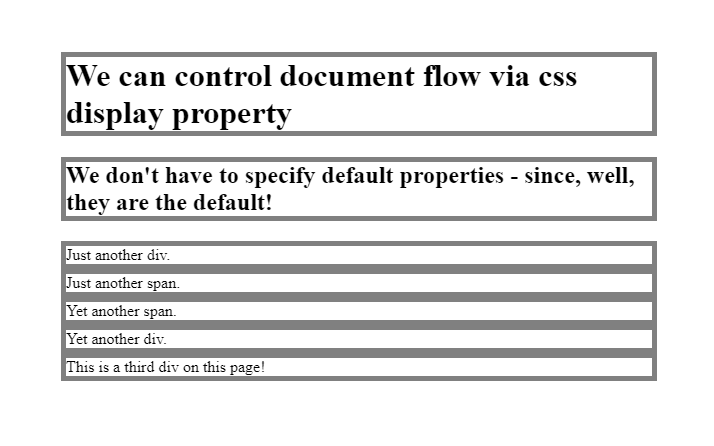 Are elements on our page going to behave like block-level or inline elements?

We have complete control over that.

This is the CSS for the above HTML:

Are elements on our pages going to behave like block-level or like inline elements? We have complete control over that!

Whatever CSS class we give our elements, that’s how they’ll behave! Here we gave the .border2 class to our <span> elements so that it’s obvious that they’re stretching the full width of the available screen space.

Flipping the behavior of inline and block-level elements

In the next codepen example we’ll show here, we’ll be playing with the inline and block-level display CSS property.

< Back to part 4: Controlling document flow via display property

You are here: Part 5, Block VS inline elements

Continue to part 6: The box model >