In CSS, positioning is relative, not just some absolutely fixed, static thing!

This is the eighth post in this series of articles.

Like we mentioned in article six in this series, CSS has a position property and it’s values can be set to static, relative, absolute, and fixed.

I’ve recorded a video on CSS positioning to accompany this article.

I’ve separately recorded another video on how the position sticky works.

Note that position: absolute is similar to position: relative, because it also makes the element it’s applied to move away from its position in the normal document flow.

However, position: absolute moves the element NOT relative to its position in the document flow, but rather relative to the top, right, bottom, and left EDGE OF THE PARENT ELEMENT.

As we’ve seen earlier, with position: relative, “nudging” an element doesn’t actually remove the element from normal document flow, it just displaces it. However, the empty slot in the document flow, where the element originated from, is still there.

With position: absolute, this “empty slot” where the element originated from, is not visible anymore. It is so because we completely removed the element from normal document flow, so its “original empty slot” doesn’t exist anymore. That place now gets filled with whatever element comes after it in the document flow.

Absolute positioning means that the element is taken completely out of the normal flow of the page layout. As far as the rest of the elements on the page are concerned, the absolutely positioned element simply doesn’t exist. The element itself is then drawn separately, sort of “on top” of everything else, at the position you specify using the left, right, top and bottom attributes.

Using the position you specify with these attributes, the element is then placed at that position within its last ancestor element which has a position attribute of anything other than static (page elements default to static when no position attribute specified), or the document body (browser viewport) if no such ancestor exists.

An example to practice absolute positioning

Here’s an another practice example. This one has several classes, but all the divs are positioned absolutely.

Here’s the preview of the above code in the browser: 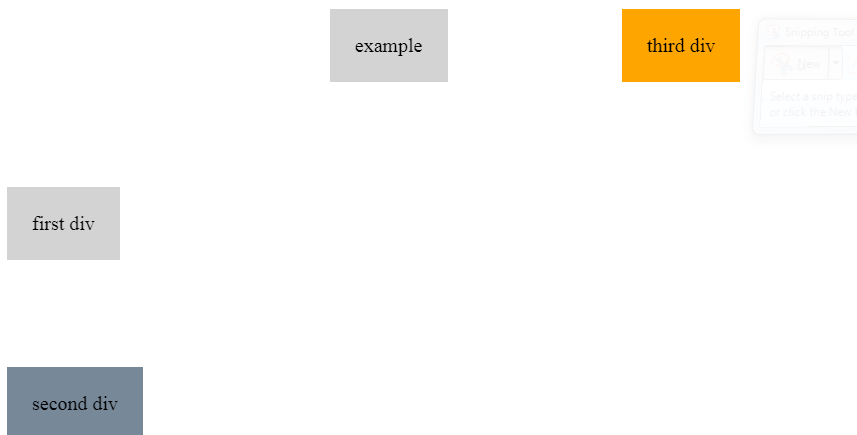 Feel free to play around with the values in the example above.

Next, we’ll discuss what happens when we position the parent element relative, and the child element absolute.

There are also some additional CSS properties stored in different CSS classes, so that the example is easier to understand visually.

This is the result of our code: 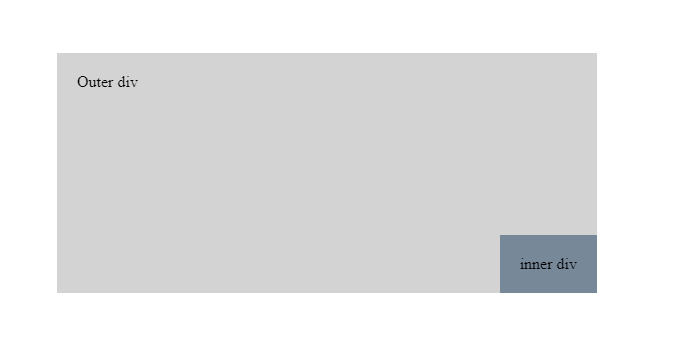 This pattern is very handy and used frequently when laying out web pages, because it allows us to position child elements precisely in certain places in our layout, no matter what.

A mini-test on abolute elements inside relative elements

Here’s a quick pop-quiz: Try moving the inner div, which is currently located at the bottom-right corner of the outer div, into a different place:

The answers can be found in the commented-out CSS code in the example codepen.

To make the answers as easy to preview as possible, we had to resort to the CSS id syntax. It’s a new concept, so let’s briefly explain it.

Similar to the class attribute, we also have an id attribute in our HTML.

As we’re already well-aware, the class attribute is targeted in CSS like this:

In terms of syntax, the id attribute is almost identical:

The difference is just that we use the # symbol to signify the id.

The important difference between ids and classes in CSS lies in specificity and usage:

Just how much greater the CSS specificity is, will be left for another article.

The practical conclusion at this point is that by simply commenting out our #child selector in the commented ANSWER ONE, TWO, AND THREE, we can see the solution to our mini-test above.

As always, feel free to play around with this code.

Note: We’re also using the unset value in several CSS properties in the answers. That’s because the unset will reset any CSS property back to the default.

Thus, if we didn’t use right: unset and bottom: unset in our third answer’s #child selector, the <div> element would still have the bottom and right0 classes applied to it, which would result in the inner div stretching all the way to the bottom right corner of the outer div.

In other words, if we didn’t unset the bottom and right properties, this is what we’d get: 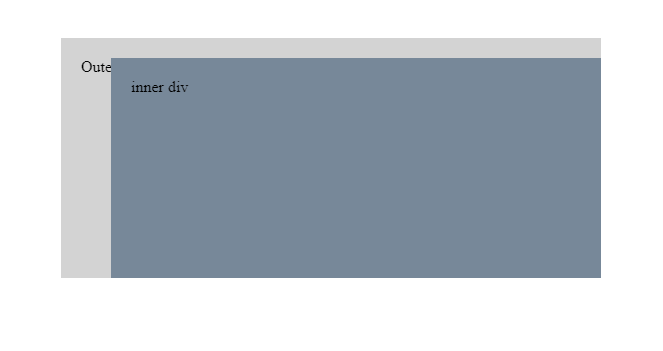 This also brings us to an interesting aside conclusion: If we want to have the inner element stretch the full width of the parent, we can simply use the position: absolute, left: 0, and right: 0. Of course, we can place it on top of the outer div with top: 0, or the bottom with bottom: 0.

Have you ever wondered how on some sites, the navbar always stays on top of the window - even if you scroll?

It is actually quite easy to make such a navbar. You just use the property: value of position: fixed.

You can think of position: fixed like this: it’s as if we glued our div onto the monitor. It’s not only outside the document flow, it’s as if it’s outside of the document itself!

Here’s an example of using fixed position on a div.

The effects of position: fixed can be seen when the document is tall enough to be scrollable, so we had to add some additional styling to make this happen.

This is the result of the above code: 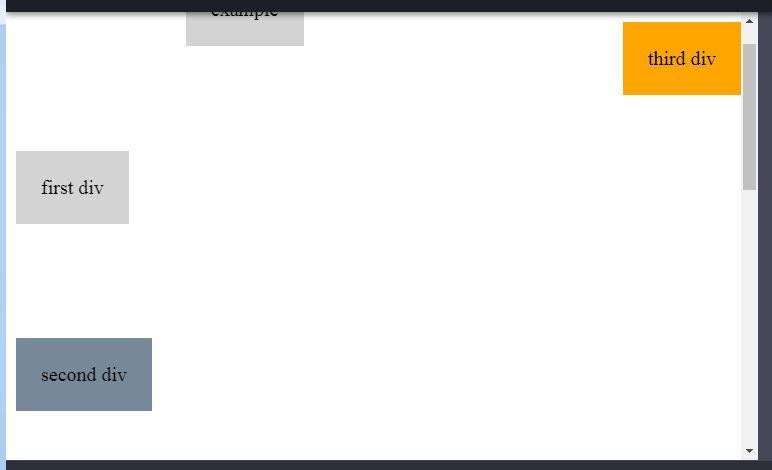 Here are our conclusions for using position: fixed

That’s it for this article. In the next one, we’ll look at images and floats in CSS.

< Back to part 7: CSS positioning

You are here: Part 8, Relative, absolute, fixed, and sticky positioning

Continue to part 9: Images and floats >