HTML and CSS Basics, part 9: Images and floats in CSS

Understanding floats and how to work with images in your layouts

This is the ninth post in this series of articles.

We’re already equipped with a lot of knowledge that will allow us to build all kinds of layouts in CSS.

However, we’ve still got a few concepts to cover.

One of them is the concept of floats, how they’ve been used and abused in the past, and how to use them in modern web development.

We’ll begin by looking at another inline element, <img>, and its relationship with the float CSS property.

We’ll begin this post by looking at our first example, which showcases the fact that images are indeed inline elements.

And the CSS code for our example looks like this:

The above code produces the following-looking web page:

Obviously, the image is displayed inline, similar to a <span> element. Actually, the <img> tag’s display is by default set to inline-block - which means that the browser will render images with top and bottom margins on if we set these margins in our CSS.

Let’s say we want to have an image on the right or the left side of its container (its parent div). How do we do that? We’ll see that next.

In the codepen example titled floating images left and right, we have the following HTML code:

Why so much HTML? Because we’re trying to add enough text to see how it starts wrapping around the image.

Here’s the output in the browser: 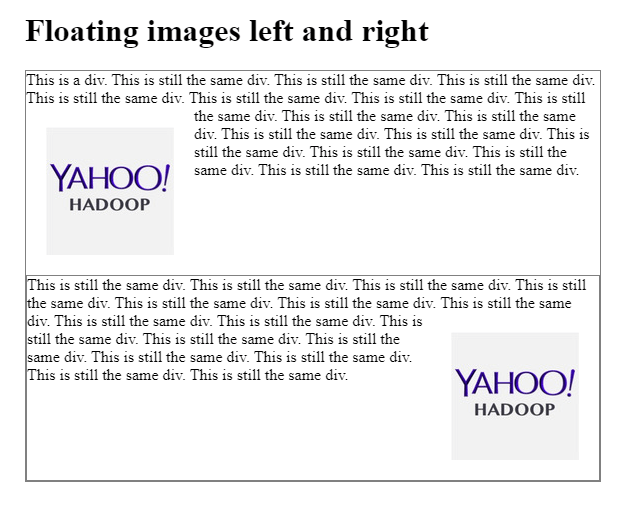 In the past, floats were an extensively used hack to create layouts.

However, today we have flexbox and CSS grid, and thus it’s not recommended to use floats unless it’s for floating images.

Still, because it’s so pervasive even to this day, next we’ll look at problems with floats in layouts and how to solve them.

Issues with floats and layouts

We’ll begin with the following scenario: We have a floated inner div, but the outer div that wraps it is not floated.

The issue here is that the non-floated parent will not be aware of the height of its floated child div.

Our codepen example for this issue can be found here.

This example shows the issue with the floated child in a non-floated parent.

The top part of the image shows the issue: the parent div is not “aware” of the height of its child element.

The bottom part of the image shows how the child element is wrapped by the parent element when the child is not floated.

How do we solve this issue?

One simple solution is to add the overflow: auto property-value pair to our parent div.

And here’s the CSS for this solution: 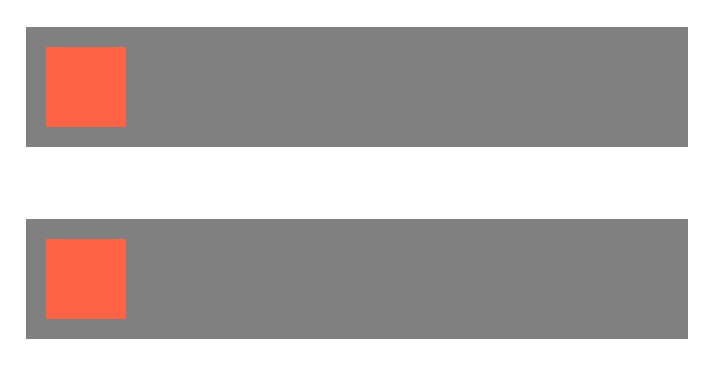 A CSS property that goes hand-in-hand with the float property is the clear property.

Without the clear property applied, the element that follows a floated element will be horizontally placed next to the floated element, if there is enough horizontal space available for the next element to fit.

All of this being said, here’s a simple way to remember the role of the clear property:

If the above definition doesn’t work for you, let’s try this one:

To drive this point home, let’s look at an example of clearing floats.

Here’s the HTML for this example:

As always, here’s the preview of the above code when ran in a browser: 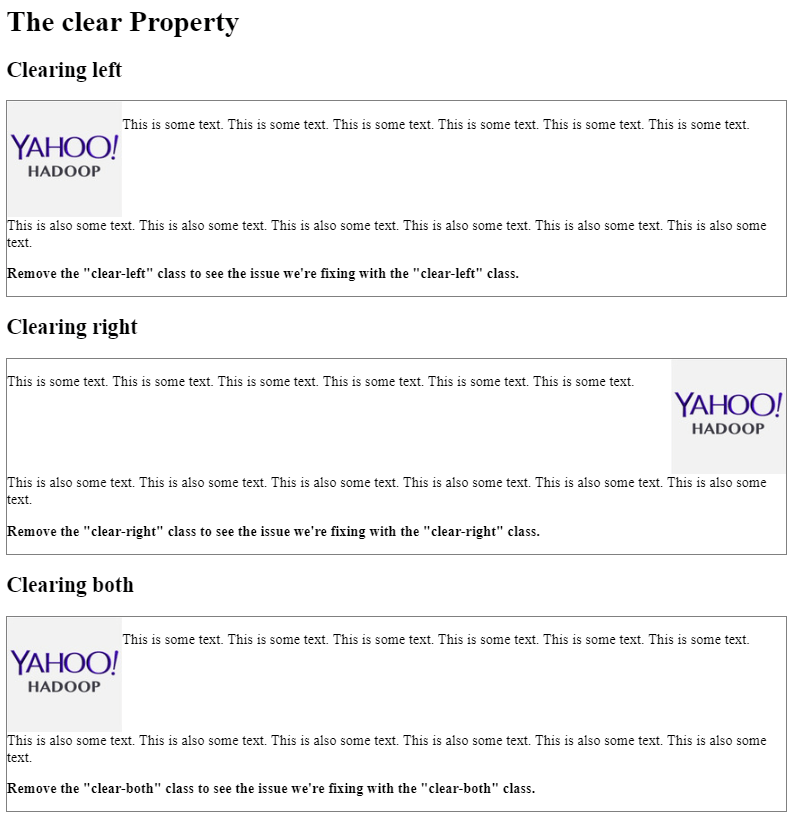 In the above example’s codepen, there’s also a simple mini-task to do to see the way that the elements following a floated element will behave with clear property applied or not. See the example for more details.

Possible values of the clear property

The clear property can have these values: none, left, right, and both.

With clear: none, the element is not moved down to clear any float.

With clear: left, the element is moved down to clear left-floated elements before it.

With clear: right, the element is moved down to clear right-floated elements before it.

With clear: both, the element is moved down regardless of whether the elements before it are floated left or right.

Why use clear: both over clear: left or clear: right

The first of these two examples shows how a clear property moves the third box under the second floated box, as can be seen in the web page screenshot: 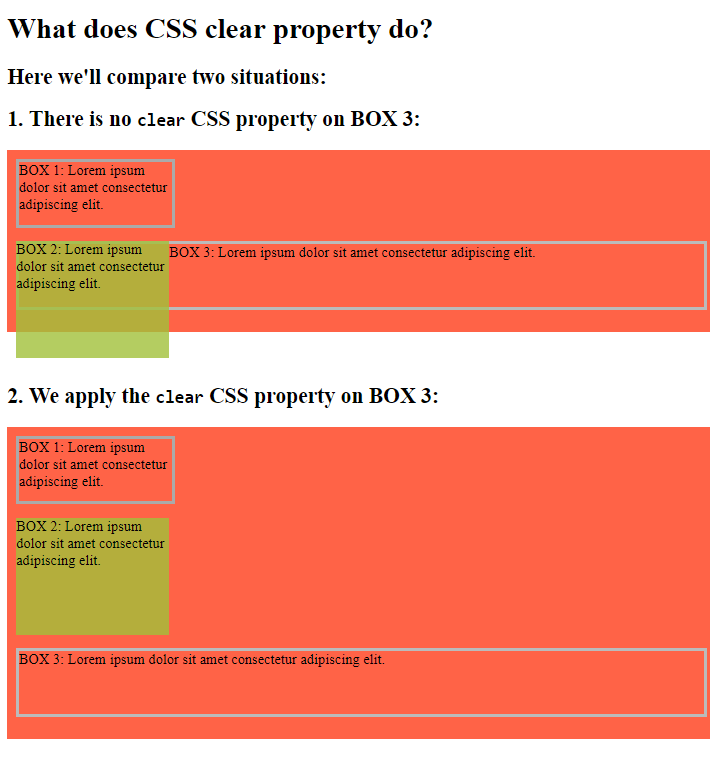 The second of these two examples shows several combination of floats and clears, as follows:

We can see a preview of all these combinations in the following screenshot: 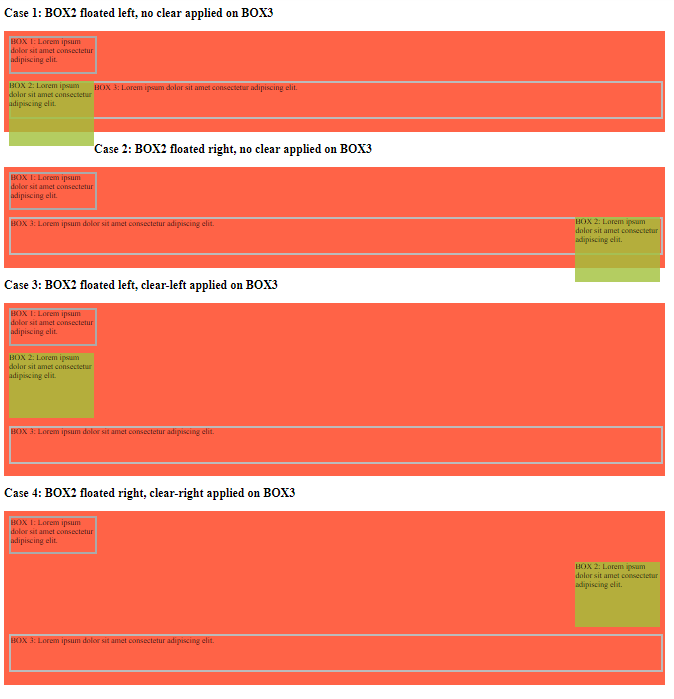 It’s also important to mention the clearfix hack approach. Instead of using overflow: auto, you can use this code:

This will make sure that the element that follows either a right-floated or a left-floated element will clear no matter what.

The interesting part of the above syntax is the .clearfix::after. The ::after is what’s known as a pseudo-selector. We’ll cover that in the next post in this series.

This concludes our post on CSS floats. In the next post in the series, we’ll be revisiting CSS selectors to get a deeper understanding on the topic.

< Back to part 8: Relative, absolute, fixed, and sticky positioning

You are here: Part 9, Images and floats