Let's practice using React props and understand why they're so important

Now, in this chapter, we’re “back to the basics”, in the sense that we’re continuing from where we left off at the end of Chapter 1.

However, now we should have a better idea of why things are done the way they are. Basically, if we need to transpile our code, like we did at the end of Chapter 2, why not go all-in and use a fully-featured build step? That’s exactly what was happening with our simplest React app built in Chapter 1, with the help of the create-react-app utility.

Now that we’ve gotten acquainted with some of the piping of our local React installation, let’s improve our retention by rebuilding the app we’ve built earlier in this chapter. We’ll do it two times: on our local machine and on codepen.

Exercise 1: Build a new app about a car (locally)

Let’s build a new app about a car. We’ll pass it a className of person and we’ll give it three props: a make, a color, and a year.

Try it on your own before you continue reading.

The rest of the code in index.js looks the same as in the default starter app.

Here’s an example screenshot of our car app:

Exercise 2: Build a new app about a car (on Codepen)

Like before, try to build one on your own before you see the solution in the book.

The solution is available as a Codepen titled Simple React props (my car example).

Although it’s quite similar to what we already had, there are also some minor differences. Namely, we’ve built the Car component as a separate component, and then we’ve used it as a custom “HTML” element inside the app variable.

We’ve then passed the app as the first argument of the ReactDOM.render() method, and the second one was the location where to mount the app.

If this is a bit unclear, remember the “formula” in pseudo-code:

Exercise 3: Add an image to our Car React app on Codepen

To close this chapter off with a fun exercise, let’s update it so that we also render an image of a Honda car from the unsplash.com website.

Now our car website is looking a bit nicer, as can be seen in the screenshot below. 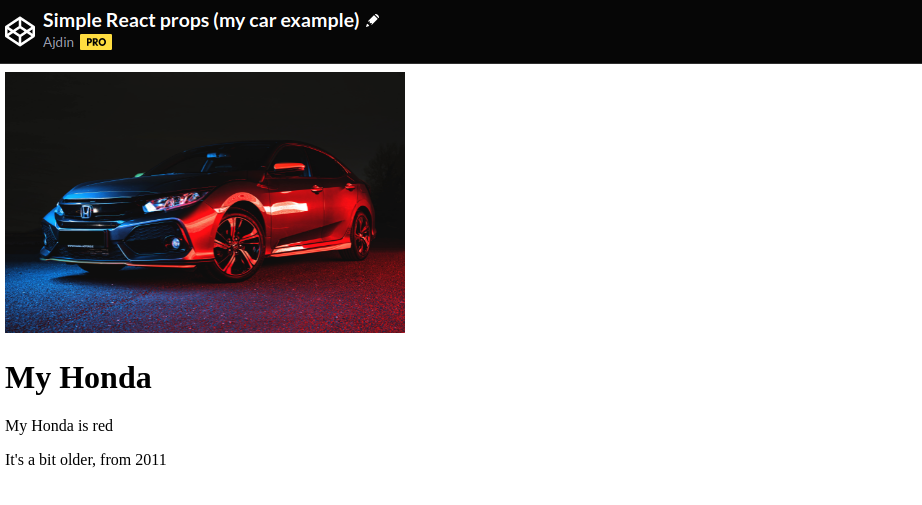 The best thing about props is that they allow us to make reusable components possible.

What does that mean?

To truly appreciate the elegance of this approach, we’ll need to start with a hard-coded example.

The HTML remains unchanged. There are slight updates to our CSS:

The hard-coded JSX is quite long:

The Codepen for the above example is titled Hard-coded cards without React props.

In this hard-coded example, we have a number of hard-coded card components, where each card holds some data about a single car.

However, this is problematic, as it’s hard to maintain and hard to update.

Any updates on such a hard-coded site would require manual updating of images and text. Instead, the vast majority of modern websites receives the data from a database, and then the HTML structure simply gets updated with whatever data comes over the wire.

In order to achieve this in React, we’ll need to use props and remove our hard-coded information.

This practically means that our code should be updated to this:

The above code renders the following view in the browser:

The above code is saved in another Codepen, titled Repeating cards using React props, pt 1

There are a couple of conclusions that we can draw from the above changes:

While adding hard-coded cards would become really, really hard to maintain, the current setup is a step in the right direction.

However, things can be even further improved, by looping over the Car component’s data. We’ll see an example of this approach in the upcoming chapters.

With this, we close the current chapter. In the next one, we’ll learn about some older and some newer concepts in React.