In the previous article, we’ve learned how to build the simplest possible React app on our local machine. In this lesson, we’ll learn about making things even simpler, by serving React from a CDN.

The quickest possible way to use React

Here’s the quickest possible way to use React:

In the file above, we’ve just reimplemented the stripped-down starter app we ended up with in the previous chapter.

Here’s a codepen of the above code, titled The simplest React example.

In the above code, we’re using the ReactDOM and React objects, running methods on them to build the structure to be rendered on the screen.

Here’s a simplified “formula” (in pseudo-code):

The El above is the element to render (in this case, an h1, built using React.createElement), and the Target is the DOM node into which we’re mounting the element.

Now we can build another node and load it into another div, as follows:

This second example can be found in codepen titled The simplest React example, revisited.

Now’s the time to practice! Let’s add three more headings. Feel free to give them any title you want.

Also, you don’t have to mount them in different “real” elements on the page. You can use that single div with the id of app that we started with in the first example.

This would result in only the h2 being rendered on the screen.

So what’s the solution?

If you’re impatient to see a working solution, navigate to the codepen titled The simplest React example, practice.

Here’s the relevant part of the above codepen:

The above code is formatted so that it’s made more obvious that the 'div', null are “separate” from all the nested React.createElement() calls.

Using this approach, we might render an entire DOM tree, but it would be a bit hard to read.

Still, let’s stick around just a bit longer at our current place, so that we can additionally render some CSS classes - just to get a feel for how it works in this approach.

We’ll add some styles to the head of our new example:

And now we can replace the null parameters with some CSS classes:

The above updates are available in a codepen titled The simplest React example, practice pt 2.

What happened to the DOM?

This is a good opportunity for us to discuss the curious case of “the DOM disappearance”.

Without going into too many details at this point, one of the effects of using the React library is that we’re no longer concerned with what’s happening with the DOM. For all intents and purposes, the DOM has dissapeared for us - precisely because we’re using React.

This shift in focus results in us not having to think about all the various ways of directly touching the DOM with vanilla JavaScript methods like insertBefore(), createElement(), appendChild(), etcetera.

Instead, we are free to think about React and its components, the data that comes in and how to render it. React uses virtual DOM to obey our more declareative instructions, and updates the actual DOM much more efficiently than what is likely to would be happening if we were doing it ourselves.

In other words, we just tell React what we want to happen on the screen, and we let React worry about how it’ll update the real DOM.

However, the DOM is not completely gone. If we really want to work with it, React does allow it - but it’s probably better to simply let it go.

So, what are the takeaways from this chapter?

Let’s revisit the most recent example we had:

Let’s now use a React “invention” to make the above code easier to work with.

In the script above, we’ve replaced the rather “clumsy” way of adding components:

… with a lot more approachable one:

Unfortunately, the above code doesn’t work.

That’s why the codepen for the above example is called The simplest React example, introducing JSX - broken without a transpile step.

JSX is indeed broken without a transpile step:

The reason for the error should be obvious: When the JS engine tries to parse this code:

…as soon as it hits the opening angle bracket < character - it throws an error.

This brings us to the core of what JSX is: it is “HTML in JS” syntax - which is not regular syntax for any JS engine. For a JS engine, JSX is incomprehensible gibberish.

However, we can make it understandable by having a transpile step in our development process.

Luckily, the Codepen platform comes with a built-in feature of JS preprocessor activation.

To activate Babel on Codepen, all we have to do is click the gear icon in the top-left of the JS panel, and then set up the transpilation step as can be seen on the following screen-shot. 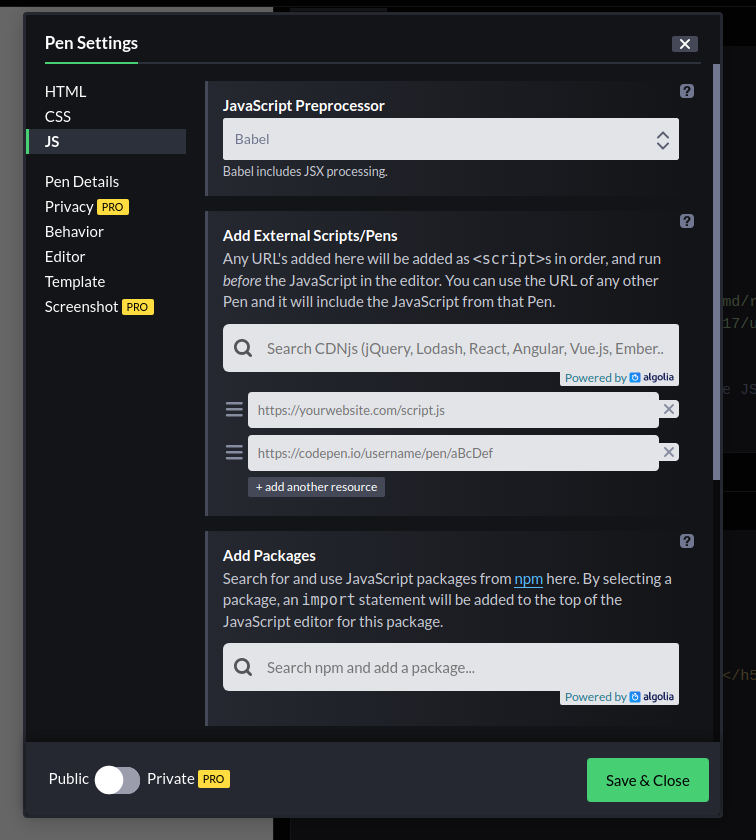 So let’s try our JSX example again, with the codepen titled The simplest React example, introducing JSX - working with a transpile step.

Why is this important?

The second point is especially important, because it allows us to explore on our own. Such exploration is crucial, because it brings back the excitement of the unknown back into our learning.

Important note: In plain HTML, there are self-closing tags, such as <input>. However, in JSX, all the tags need to be closed. Thus an input tag in JSX must look like this: <input />.

It’s time for another exercise.

Go to Codepen website, and type in “React” into the search box.

Browse through the examples, and try to find at least one example that you will be able to comprehend with your very limited understanding of React (currently!)

If you are pressed for time, here is one React codepen I’ve found appropriate:

Here’s the code of the above codepen.

Obviously, the CSS is listed last because it’s almost irrelevant for our discussion.

Additionally, even this very simple example might seem a bit too advanced for us at this moment.

But let’s take a step back and analyze the code logically:

Logically looking at the code above, even without understanding all the parts of the above app, we can see that props are simply the “HTML attributes” of name and age, passed to the custom Person constructor call.

Let’s now revisit our own example and try to re-purpose it to make our own implementation a bit more dynamic.

Before we make our simplest app more dynamic, let’s revisit the code as it was:

The way to make our code more dynamic is to “extract” all the text from each of the headings and save them as variables, like this:

You might be complaining that we’ve just replaced one thing for another, but actually, this is now a lot more dynamic.

The reason why the above code is a lot more dynamic might not be obvious, but what we did above is: we’ve separated the logic from the structure in our code.

More specifically, we’ve separated the JS logic (the const variable assignments) from the HTML structure (the actual code that will be rendered using ReactDOM.render()). We’ll see why this is important when we build a data-powered layout in an upcoming chapter. For now, let’s just remember that in React, we separate logic from the structure.

Here’s one huge takeaway from the above code: JSX is a combination of “regular” HTML and JavaScript code. The JavaScript code is separated from everything else using the opening and closing curly brackets: {}.

Let’s take a single line out of the code we’ve worked with in the previous section:

The above line starts with some static HTML: <h1 className="eighty">. Then it goes into the JavaScript part: {h1Hello}, and it ends up with another piece of static HTML: </h1>. This “dance” of HTML and JS is one of the reasons why JSX is so easy to work with. Whenever we need to run some JS we simply surround our code with the opening and closing curly brackets: { and }. That’s all there is to it!

When first met with this concept, it might be a bit hard to appreciate just how much we can do with it. For example, we could have written something like this:

We can even use some more advanced JavaScript, such as:

Even better, we can combine multiple pieces of JavaScript code, for example:

This now brings us to another a-ha moment: while the above way to write JSX syntax is correct - it won’t throw errors - it’s not the best way to do it. The whole point of the separation of JS and HTML in JSX is that it allows us to write code so that it’s easy to read.

Thus, instead of writing our code as above, we could do it like this:

We can take this even further, and add as complex code as we might need.

For example, here’s a short snippet from my book A Better Way to Learn JavaScript: Useful Snippets:

Now we can repurpose it so that it looks like this:

And now we can use it in our example app:

We don’t have to stick to only text nodes in our DOM. Consider the following example:

If a user typed a named HTML color such as tomato or orange, the background of the rendered div would update accordingly.

This example is available as a Codepen titled: Dynamically changing the background color of a div in React based on user input.

Exercise: add your own dynamic JavaScript in JSX

Feel free to play around with the dynamic example starter Codepen: The simplest React example, introducing JSX (it’s dynamic). Try adding some dynamic JavaScript code and saving it in a variable, then using it inside the ReactDOM.render() method call, similar to what we’ve done in this chapter.

That’s it for this chapter.

In the next chapter, we’ll learn how to rebuild a starter app using the create-react-app module in our local environment.