This is the nineth of 20 articles in the Building Bootstrap 4 Layouts article series. 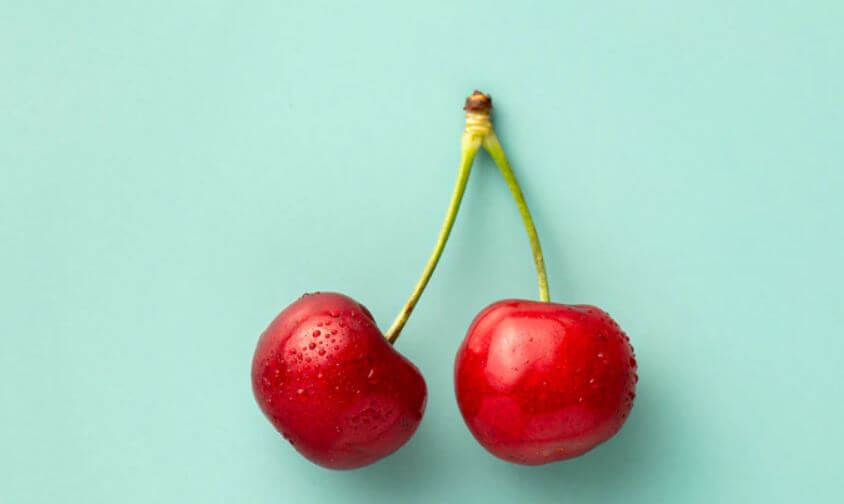 Photo by Mae My on Unsplash.com

Up to this point in the Building Bootstrap Layouts article series, we’ve built seven layouts:

The goal is to build 20 layouts in this series, but we’re actually going to see the final missing peace of the puzzle, which will enable us to build many more layouts than 20. Before we do that, let’s go back to see what we’ve covered so far.

We started easy, with containers and contextual colors. We learned about rows and responsive columns.

We then introduced Bootstrap 4 components.

We learned how to use the layouts found on the official Bootstrap examples page to build our first customized Bootstrap 4 layout.

We next saw how to copy features from premium themes and then tweak them to truly make them our own.

We got to know the Koala app for easy SCSS to CSS compilation - and we saw how to quickly update layout examples on the official docs by changing the values of SCSS variables in Bootstrap 4.

We started using the Brackets code editor and combined the techniques learned up to that point to build a completely custom layout, Movies & Typography. We learned how to import Google fonts, revisited containers, talked about mockups, worked with Bootstrap’s utility and spacing classes, discussed columns, responsive images, and source ordering.

Finally, in the previous article, we introduced Angular as a way to improve our process. We saw how to avoid repeating ourselves with Angular. We introduced modularity. We further simplified working with SCSS, using Angular.

In this article we won’t build a whole new layout. We’ll just take a few components from the official documentation, and whip up a layout.

Here are the steps we’ll take:

In the previous article, we covered how to use Stackblitz in detail. We also covered how to split and how to import sections of a website in Angular.

To track the changes to our code more efficiently, we’ll use Github.

Since this is a beginner’s series of articles, I’m assuming you haven’t heard of Github, so I’ll keep it really simple. Github is just a way to take snapshots of an app at certain points in app development.

Which points exactly? It’s completely up to us! Whenever we feel like it, we can take a snapshot of our app, called a commit. Github is using the Git system, built by Linus Torvalds of Linux.

So, once we take this snapshot of a page (i.e a commit), we can then save that change on Github. The place where all these commits live is called a repository. Thus, a repository on Github will have any number of commits for a given project, ordered chronologically.

This makes perfect sense, because a repository is like a time-machine for certain points in the development of your project.

It’s really easy to get started with Github on Stackblitz, because it’s integrated right on the Stackblitz interface. In this article however, I’m not suggesting that you even sign up. You can just inspect the commits I’ve made while building this layout.

Thus, the first commit of this project is the default Angular 8 app on Stackblitz. This link will open in my own repository for this Stackblitz app.

This first commit might look a bit overwhelming, because it simply lists all the files added to the app when it was started. As we’ve learned in the previous article, there’s quite a lot of files in a default starter Angular app.

However, every new commit is going to be much smaller, and you’ll be able to easily see what happened at each commited update to our app.

We’ll see that next, when we remove redundant files from our default starter Angular 8 app.

Rather than explainin every single line of code where we deleted traces of the Hello component, let’s just see the commit for it.

Here’s a screenshot of the above-linked commit: 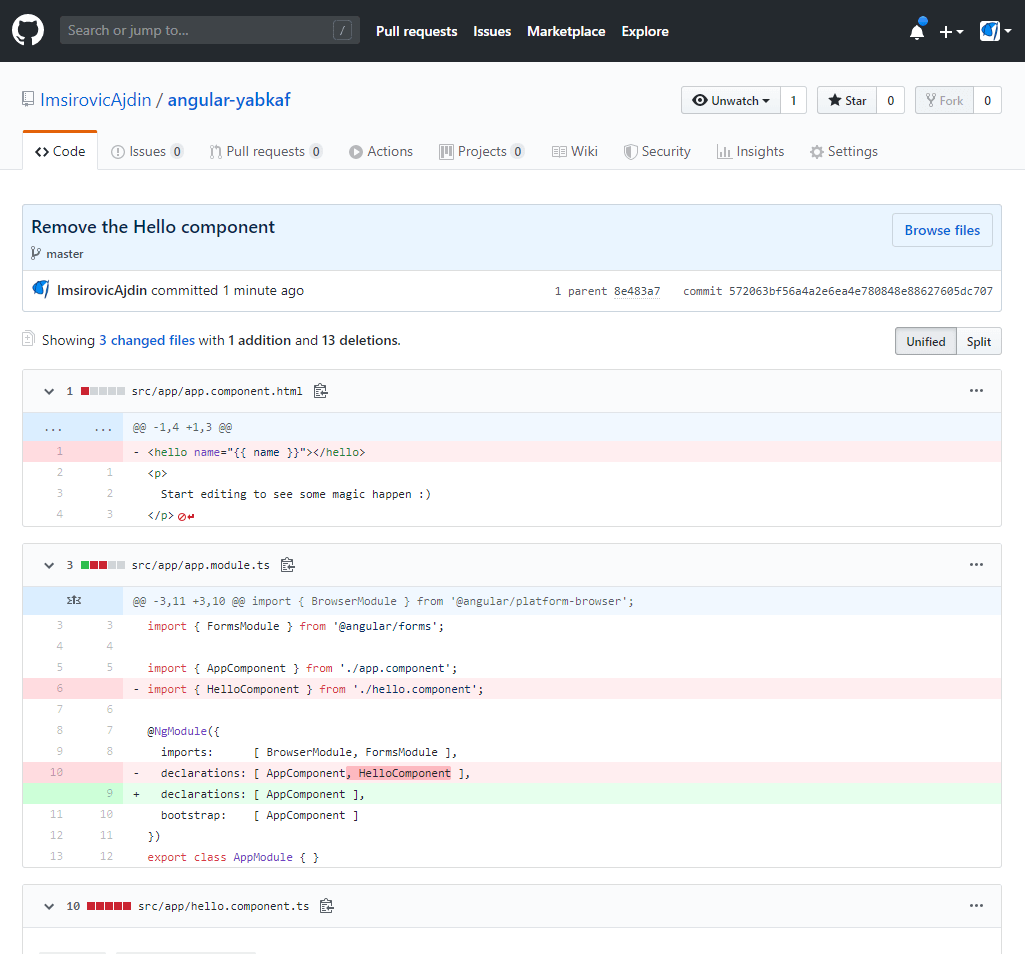 Now it’s much easier to understand what’s happening in our app at this moment in time.

Looking at the declarations array inside app.module.ts, you will see both a removal and an addition: 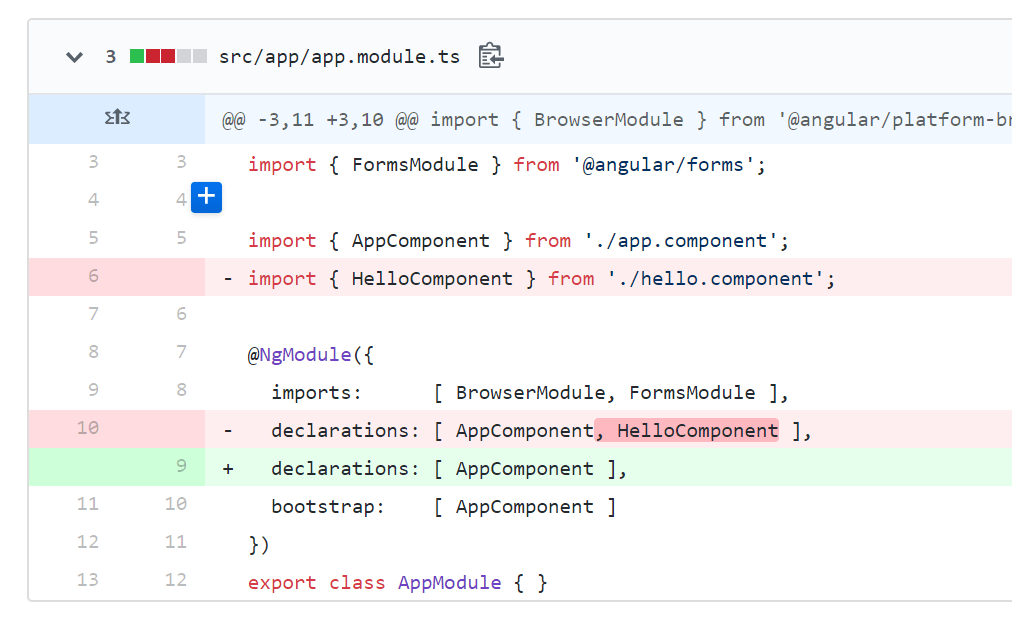 You might think: “This is wrong, we didn’t add anything, we just removed code!”, and you’d be right. That’s exactly what happened.

But Git doesn’t look at it that way.

If you have removed only a part of a line of code rather than the entire line, Git will see it as both an addition and a removal:

The line number 9 is split on two lines:

If you think about it, Git’s way of looking at deletions might actually make more sense.

The takeaway here is that if you see a red line and then a green line, and there’s only one line number for both lines, that means that a bit of this line was removed in the code. Another way to look at it: the green line will always be shorter - by the number of characters that got removed in the commit.

Looking at it again, we see there were 3 changed files:

As for the third file, the hello.component.ts file, you can see it’s deleted - it says so right under the “Load diff” link in the file’s panel (at the bottom of the commit):

If you click on the “Load diff” link, you’ll see the entire deleted file’s code. That’s sometimes useful, just to inspect the code that was removed, if you’re trying to better understand what happened at a certain stage of an app’s development.

Great, so we’ve just seen how Github and Git commits work and can be viewed.

If you inspect the changes in this commit, you’d see the following: 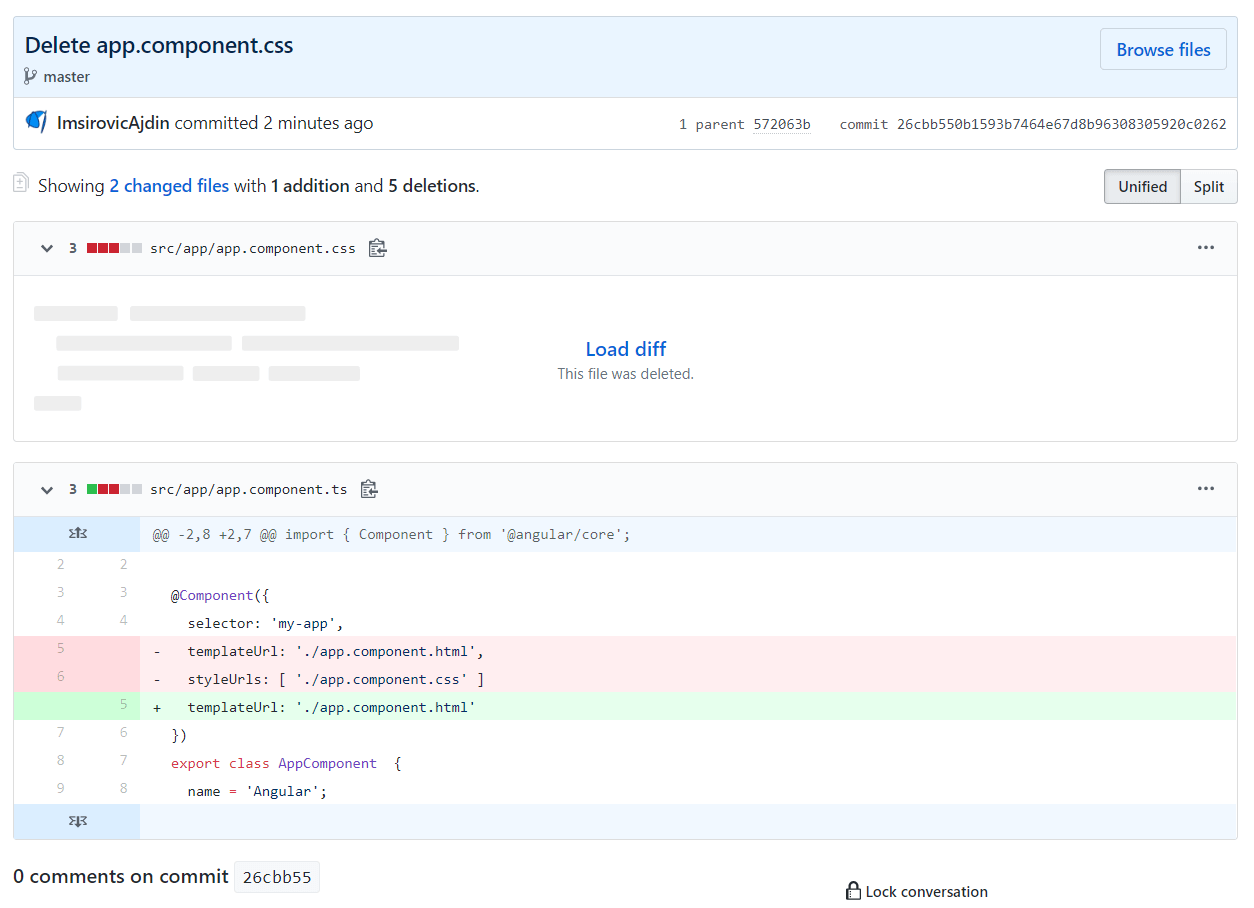 This shows us the utility of commits in Git: A nicely-worded commit, with only a few changes to our codebase, can greatly improve the understanding we get from what was happening with our app at any given time.

This goes back to what we discussed in the previous article: speed.

Properly worded commits, that don’t involve too many changes, are great to speed up our analysis of what was going on at any given time during the coding of our app.

It’s also great for learning - such as in this article - to quickly see what changes needed to be made to achieve a certain web layout feature.

That’s why we can now speed things up, using commits and commit messages as our guides.

Just like in the previous article, we’ll take our app component and move it into a separate folder, so that only the app.module.ts stays in the root of the app folder.

The new folder that we’ll move our app component to is called app-component.

Adding Bootstrap from a CDN

In this section, we’re adding Bootstrap from a CDN.

We’ll make a new component and use the copied HTML in its template file. The new component’s commit title is: Add jumbotron component.

We’re also adding a couple of cards components from the section titled Using grid markup, on the official docs. The commit title is Add the cards component.

In the previous article, we’ve seen how to add the footer component. I enourage you to fork our current Angular app, and try adding the footer yourself.

Once again, feel free to have a look at our Angular app’s repo.

In this article, we’ve introduced Git and Github. We’ve also practiced quickly prototyping a Bootstrap layout by copy-pasting components from the official docs.

In the next article, we’ll go back to a more old-school way of building Bootstrap layouts. We’ll build one locally, and this time we’ll use Git on the desktop.