This post builds on the ngx-bootstrap 8-part series of articles, in which we saw how to add all the individual ngx-bootstrap components to example Angular 8 apps.

Here is the list of posts for the entire series:

We’ll begin by looking the completed layout on Stackblitz.

A layout in Angular will usually consist of several components.

The simplest possible recipe for adding a new component to an Angular app is as follows:

A pre-requisite for the above steps to work, is for you to already have added the ngx-bootstrap dependency and Bootstrap 4 styles, as described here.

Thus, our first commit on this project is the barebones Angular app, and the second commit shows the changes we added to install ngx-bootstrap and Bootstrap 4 styles to our project.

Throughout the rest of this post, we’ll be adding components by relying on this component-building recipe.

If we think about the linked layout, we can conclude that it consists of the following areas:

We should split each of these features into their own component, as so the frist step in our recipe will be to add the following files and folders:

The contents of these files is almost the same at this point. Here’s the code for the header’s template file (header.component.html):

Here’s the code for the header’s class file:

We’ll add the other files in the similar way. Have a look at the commit if you’d like to copy-paste them.

Back in app.component.html file, we’ll import the new components:

Of course, we’re faced with the following error now:

To fix it, we’ll need to import the components’ class files into the app.module.ts file, and also add them to the declarations array, like this:

After making all these changes, our app now looks like this: 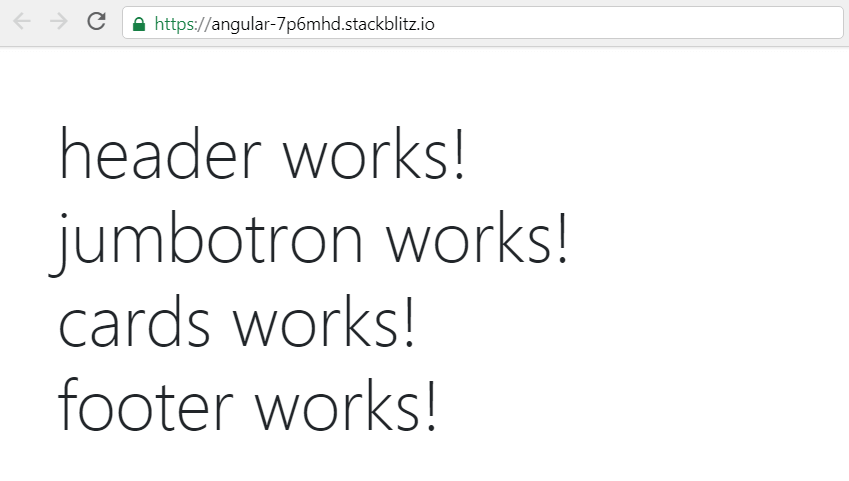 Once again, this is our current commit.

Next, we’ll add the jumbotron, since it’s a simple addition to our app.

We’re adding jumbotron first because it consists only of HTML and CSS. Thus, it’ll be enough to copy-paste the example code from Bootstrap docs.

We’ll paste the code for the first jumbotron example into jumbotron.component.html:

We’ll also remove the display-4 class from all of our custom HTML tags inside app.component.html so that now it looks like this:

Here’s a screenshot of our update at this stage: 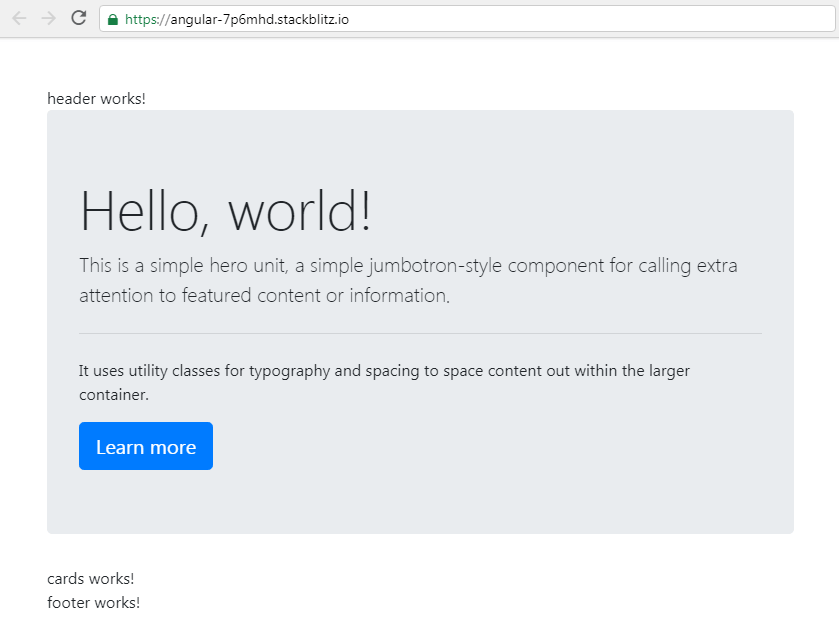 And here is the commit with this jumbotron update.

We’ll copy the header HTML code straight from the example on Bootstrap docs, and paste it into header.component.html:

The commit for this stage is available here

However, our toggle button is not working? Why is that?

It’s because Bootstrap, out-of-the-box, uses jQuery. However, in Angular, using jQuery is frowned upon, because the whole point of Angular is not to update the DOM directly - which jQuery does - but rather let the Angular’s VDOM engine do the heavy lifting.

This also means that we need to somehow make the toggle button work with Angular, without relying on jQuery.

So, we’ll begin by adding the BrowserAnimationsModule and CollapseModule, and listing it inside the imports array in app.module.ts.

Stackblitz will require us to install the @angular/animations package, so let’s click the INSTALL PACKAGE button.

We also need to use the isCollapsed property inside the header’s class file, as well as add the toggleCollapsed() function:

And finally, we’ll bind the isCollapsed property to the collapsing div, like this:

Now we have a working collapsible toggle button in our layout.

Here’s the commit for the working toggle button.

Similar to how we copy-pasted the header, we’ll add the footer’s HTML from the example on Bootstrap docs:

To get the correct styling, we’ll also need to copy the entire custom CSS file from the example layout, available at this link.

The best place to copy this file to is probably styles.scss file, since there might be some CSS code that applies to the entire layout.

This is the copy-pasted CSS code: 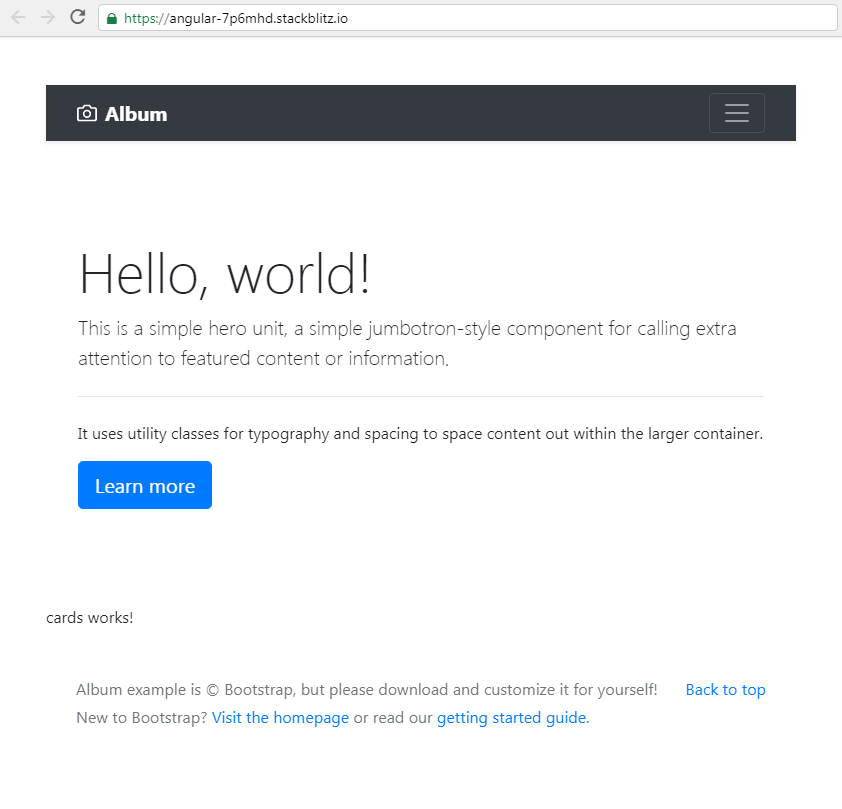 At this point, it’s probably a good idea to commit everything, so here’s the latest update.

Similar to what we did before, we’ll copy-paste the HTML for the cards component:

To contain the width of the card so that it doesn’t strech the full width of its parent container, we’ll also add three wrapping divs:

While we’re at it, let’s also remove the padding class, p-5, from the wrapping app.component.html div.

The commit for this stage in our app can be found here.

This is what our app looks like with a single card added: 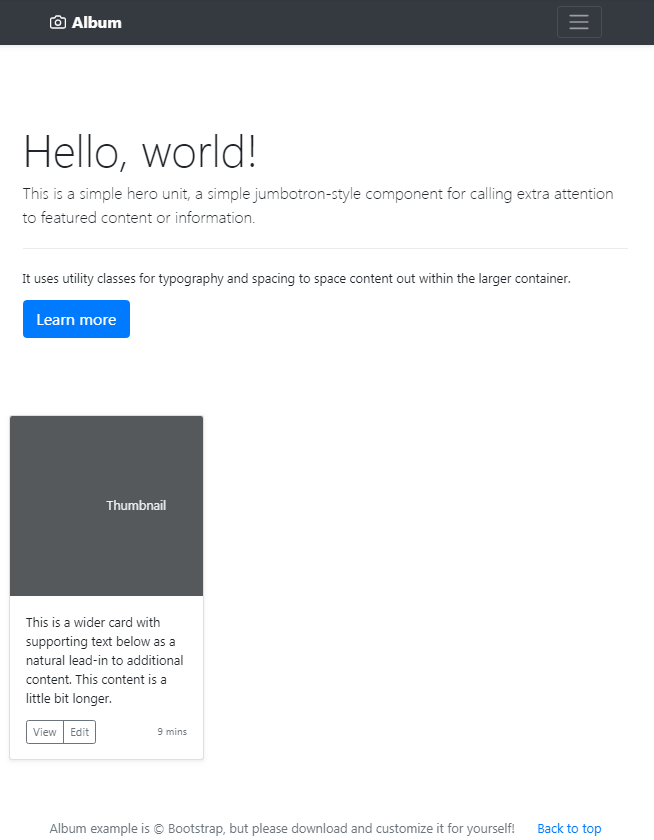 One of the benefits of working with a framework like Angular is that is makes it very easy to repeat an element for any number of times.

Here is the code we’ll use:

Our Angular 8 layout is now starting to look a lot like the the example layout from the official Bootstrap documentation.

Next, we’ll fix the jumbotron so it looks exactly like the one in the source layout. We’ll also add a few other minor tweaks so we can call it a day.

As always, here’s the commit at this stage.

Improving the jumbotron and adding other minor fixes

We’ll begin by copy-pasting the code for the jumbotron from the official example layout:

Next, we’ll wrap everything in between the header and the footer component with a main HTML tag. We’ll do it inside app.component.html, like this:

We’ve also moved the image title that reads “Thumbnail”, so that it’s visually centered in the image area.

The full-page view of the re-created layout in Angular 8 is available at this Stackblitz link.

The commit at this point can be found here.

To update the width of the main area, we can simply add the following CSS to styles.css:

Also, since the arrays are counted from zero, we’ve updated the repeater to repeat(11) instead of repeat(12).

With this updated commit we wrap up this article.